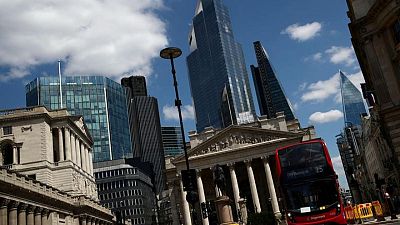 -Office space provider IWG warned on Monday that its 2021 core earnings will be well below last year’s crisis-hit level as continuing curbs in some markets and new COVID-19 variants derail recovery, sending its shares as much as 16% lower.

The grim forecast in an unscheduled trading update underlines the challenges facing an industry that has seen occupancy levels plummet as a shift to remote working during the health crisis emptied out many office buildings.

Shares in the Regus owner were 15% lower at 310 pence by 0741 GMT, heading for their worst one-day drop since March last year.

IWG and its rivals have to some extent pinned their hopes on offering work spaces that would align with a permanent shift to a flexible working model, dividing week days between the office and home.

IWG, which has already signed deals with companies including bank Standard Chartered for hybrid working services, said on Monday it was making good progress on larger master franchise agreements, with several in the final stages of talks.

Rival Workspace has warned that a recovery to pre-pandemic levels will take a couple of years.

“For it (underlying core profit) to be ‘well below’ is remarkable, when Q1 commentary was upbeat, occupancy troughed in February and price was supposed to be moving up,” Peel Hunt analysts wrote.

“There is no question that this is disappointing.”

IWG said it still expects a strong recovery in 2022, adding it has continued to see “unprecedented demand” for its hybrid work options.

The company said occupancy was improving in markets where pandemic curbs were easing, including the United States, while enquiries touched pre-crisis levels.

Softbank-backed office-sharing startup WeWork, which posted a first-quarter loss of more than $2 billion as it prepares to go public, also said last month it was starting to see signs of a recovery as more people returned to the office.