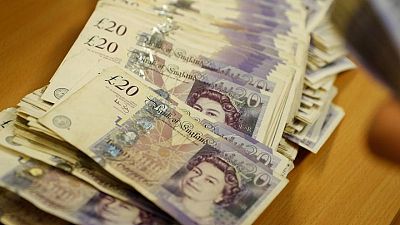 <div> <p>By Ritvik Carvalho</p> <p><span class="caps">LONDON</span> – Britain’s pound gained against the dollar on Friday and erased its losses against the greenback on the week as weaker than expected U.S. jobs data knocked the dollar off its recent highs.</p> <p>A recent string of strong economic data releases from the United States boosted the dollar index – which measures the greenback against a basket of currencies – this week to its highest level since mid-May.</p> <p>Those gains came as investors anticipated that the Federal Reserve may respond to the economy heating up and move towards tightening policy sooner than expected. </p> <p>However, Friday’s jobs data release knocked the dollar off its perch and gave some breathing room for the pound, which was earlier set for its first week of losses in five. The pound is now on track to end the week flat.</p> <p>By 1311 <span class="caps">GMT</span>, sterling was nearly 0.7% higher to the dollar on the day at $1.4189. Against the euro, it was 0.3% higher at 85.78 pence.</p> <p>“Expecting <span class="caps">GBP</span> to hold onto its gains against the dollar today as markets digest the disappointing <span class="caps">NFP</span> (non-farm payrolls) print in the context of what this means for Fed policy,” said Viraj Patel, global macro strategist at Vanda Research.</p> <p>The pound, which is the second best-performing G10 currency against the dollar year-to-date, has suffered on account of the dollar’s strength in recent days and on worries that a new coronavirus variant spreading across Britain may affect plans to continue reopening the economy.</p> <p>The British government will review plans on June 14 to fully open the economy.</p> <p>Sterling has been among the top-performing G10 currencies this year, at one point in the lead, as bets for a quick reopening of Britain’s economy on the back of the country’s vaccination programme.</p> <p>Speculator positioning is still directionally net “long” the pound, which means that the market is betting on future gains for the currency against the dollar. [IMM/FX] [CFTC/]</p> <p>Strategists at <span class="caps">ING</span> remained broadly positive on sterling’s prospects despite the newsflow.</p> <p>“We doubt the decision on 14 June whether to fully open up the UK economy will have a material impact on the <span class="caps">GBP</span> outlook,” they said in a morning note to clients. </p> <p>“We feel there is good momentum behind the economy right now – enough to support the BoE’s (Bank of England’s) reasonably bullish set of forecasts and probably maintain expectations that the BoE could tighten before the Fed in 2H22.” </p> <p/> </div>