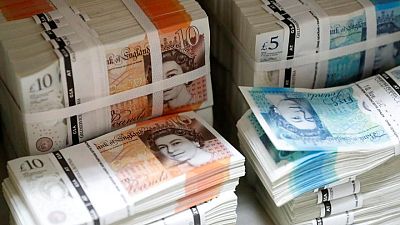 LONDON – The pound fell against the dollar on Thursday as data showing an increase in hiring by private employers in the United States pointed to a rapidly recovering economy, which lifted the greenback.

Investors had piled on bets against the dollar in recent months but have lately grown more cautious, wondering whether a surprisingly strong U.S. economic rebound threatened the theory that interest rates will stay low for a long time.

April’s big miss on payrolls, when monthly hiring of 266,000 confounded expectations for 1 million, had left investors jumpy as to the strength of the U.S. recovery.

Traders also awaited U.S. nonfarm payrolls report for May, due on Friday, which could set the tone at central bank meetings later this month.

Investors are waiting for firmer signals as to whether growing cases of a COVID-19 variant first found in India could delay the wider reopening of the British economy due on June 21.

Britain’s currency has been a top performer among its G10 peers this year, buoyed by optimism around the country’s rapid vaccination programme and hopes its economy will therefore rebound quicker than some others.

Those hopes have frayed in recent weeks, however, as rising cases of the COVID variant now known as Delta led Prime Minister Boris Johnson to say he would be cautious in lifting restrictions on travel and social distancing.

The government is mulling a delay to the June 21 date for the lifting of the remaining restrictions, according to media reports on Wednesday.