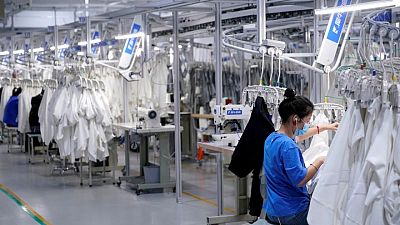 <div> <p><span class="caps">BEIJING</span> – China’s services sector expansion slowed in May, a private sector survey showed on Thursday, with weaker overseas demand and increased costs putting pressure on businesses.</p> <p>The Caixin/Markit services Purchasing Managers’ Index (<span class="caps">PMI</span>) fell to 55.1 in May, down from 56.3 in April but still well in expansionary territory. The 50-mark separates growth from contraction on a monthly basis.</p> <p>The survey attributed part of the slowing expansion to a fall in overseas demand as <span class="caps">COVID</span> cases abroad hurt business activity. A gauge of export orders slipped into contraction.</p> <p>The Caixin <span class="caps">PMI</span> contrasts with an official survey released earlier this week, which showed activity in China’s services sector expanded at a faster pace in May.</p> <p>Though slower to recover from the epidemic than manufacturing, a gradual improvement in consumption has stimulated activity in China’s services sector, which includes many smaller and private companies.</p> <p>Growth in total new orders slipped and services firms increased their staffing levels for the third straight month, but at a slower pace, the Caixin survey showed.</p> <p>Inflation pressures worsened with input costs rising at a sharper rate in May and reports of more expensive raw materials, energy, staff and transport, the survey found.</p> <p>Even though firms were able to raise selling prices for the 10th straight month, the increases have yet to catch up with the inflation in input costs.</p> <p>“Services supply and demand continued their upward trends for the 13th consecutive month, though both expanded at a slower pace than in the previous month,” said Wang Zhe, senior economist at Caixin Insight Group, in a statement accompanying the data release.</p> <p>“Inflationary pressure was enormous as price gauges continued to rise. Both the measures for input costs and the prices service providers charged rose to their highest points of the year.” </p> <p>The Caixin China General Composite <span class="caps">PMI</span> came in at 53.8 in May, weaker than 54.7 the previous month.</p> <p/> </div>