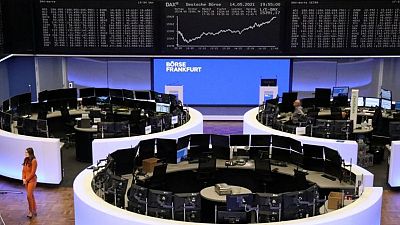 <div> <p>By Katanga Johnson</p> <p><span class="caps">WASHINGTON</span> – Global equities markets lagged on Thursday after stepping back from near-record levels earlier in the week, as investors studied strong U.S. data reports for economic recovery and inflation signals.</p> <p/> <p>Graphic: World FX rates https://tmsnrt.rs/2RBWI5E</p> <p/> <p>U.S. stocks wavered during the session and ended lower as investors experienced rosy reports about corporate tax hikes but still wary about the Federal Reserve potentially shifting monetary policy.</p> <p>Analysts said the moves in major stock indexes have been muted in recent days as concerns about high valuations for many stocks following the months-long rally in U.S. markets gives some investors pause.</p> <p>“The market is digesting strong economic data with some inflationary pressures and factoring in whether this will change the timing of Fed tapering and how to factor that into stock prices,” said Brad Neuman, director of market strategy at Alger in New York.</p> <p>Oil was little changed following two straight days of gains that took oil futures to highs not seen in a year, after weekly U.S. crude stocks fell sharply while fuel inventories rose more than expected.</p> <p>U.S. crude recently rose 0.07% to $68.88 per barrel and Brent was at $71.36, up 0.01% on the day.</p> <p>Gold slid more than 2% as a strengthening labor market helped propel the dollar higher.</p> <p>The dollar index, which tracks the greenback versus a basket of six other currencies, rose 0.574 points or 0.64 percent, to 90.483 after falling 2% in April and a further 1.6% in May. </p> <p>The euro was last down 0.66 percent, at $1.2129, drifting away from highs scaled earlier in the week, while Europe’s broad <span class="caps">FTSE</span>urofirst 300 index dropped 0.07 percent at 1,736.44.</p> <p>A better-than-expected U.S. weekly unemployment report and private payrolls numbers for May pointed to strengthening conditions in the labor market, while a measure of service sector activity increased to a record high, pointing to a robust economic rebound.</p> <p>The strong data could force the Federal Reserve to pare back its crisis support sooner than expected, despite central bank officials’ reassurances to the contrary. </p> <p>Yet, wary investors backed away from big bets over concerns of inflation ahead of the Friday release of U.S. jobs data, which should offer further clarity on whether the faster-than-expected pace of economic recovery can be sustained and what that might mean for monetary policy.</p> <p>The <span class="caps">MSCI</span> world equity index, which tracks shares in 50 countries, fell 3.06 points or 0.43 percent, to 711.36.</p> <p>The Dow Jones Industrial Average fell 23.34 points, or 0.07%, to 34,577.04, the S&P 500 lost 15.27 points, or 0.36%, to 4,192.85 and the Nasdaq Composite dropped 141.82 points, or 1.03%, to 13,614.51.</p> <p>A surge in euro zone business activity did little to improve sentiment. <span class="caps">IHS</span> Markit’s final composite Purchasing Managers’ Index (<span class="caps">PMI</span>) jumped to 57.1 last month from April’s 53.8, its highest level since February 2018.</p> <p>Benchmark 10-year notes last fell 11/32 in price to yield 1.6284%, from 1.591%.</p> <p>While broader stock markets remain close to record highs, the momentum seen earlier in the year has ebbed as investors worry a stronger-than-expected rebound from <span class="caps">COVID</span>-19 means higher inflation and sooner-than-expected monetary policy tightening.</p> <p>Thursday’s weekly U.S. unemployment claims report will be followed by monthly jobs numbers on Friday, which investors hope will offer fresh insights into the recovery in the labor market.</p> <p>So far though, “increases in inflation expectations have coincided with equities performing well recently,” said Oliver Jones, senior markets analyst at Capital Economics.</p> <p>“In general, we suspect that these conditions will remain in place for a while longer.”</p> <p>Capital Economics forecasts that real global output will grow at the fastest rate in nearly 50 years this year. </p> <p>“While it is possible that major central banks eventually have to tighten policy faster than is widely expected if inflation does not fall back in the way they are anticipating, it will be hard to tell if this is happening until next year at the earliest,” Jones said.</p> <p/> </div>