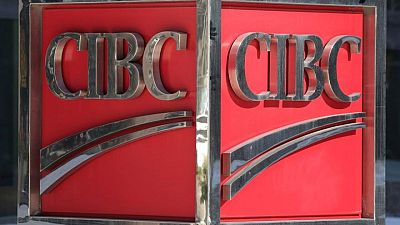 <div> <p>By Nichola Saminather</p> <p><span class="caps">TORONTO</span> – Even as Canadian businesses prepare to reopen gradually this summer after a year of intermittent lockdowns, banks are wary about the prospects of a fast uptick in credit growth as an economic recovery remains patchy and cautious commercial clients hold on to record amounts of cash hoarded during the pandemic.</p> <p>Canada’s top six banks – Royal Bank of Canada, Toronto-Dominion Bank, Bank of Nova Scotia, Bank of Montreal, Canadian Imperial Bank of Commerce and National Bank of Canada – have emerged relatively unscathed from the pandemic, thanks to government support programs and their own loan deferrals.</p> <p>As traditional lending to businesses dried up, the banks binged on mortgages on the back of a red-hot property market.</p> <p>That resulted in the average mortgage balance at the six lenders hitting a record C$1.18 trillion ($978.5 billion) in the three months through April, up 9% from a year earlier, surpassing the pace seen during the 2017 housing market peak.</p> <p>But mortgage growth is expected to slow, said Mike Clare, portfolio manager at Brompton Group, as a surge in home prices since last summer crimps affordability and stricter mortgage rules take effect.</p> <p>That coupled with an uneven business recovery means Canadian banks’ core lending operations at home could see sluggish growth for much of this fiscal year.</p> <p>“I am concerned about loan growth going forward,” said Edward Jones analyst James Shanahan. “There’s a fair amount of uncertainty in Canada about the strength and magnitude of the economic recovery due to repeated pandemic-related lockdowns.”</p> <p>Business loan balances saw year-on-year growth of only 0.2% on average, albeit from a period when many companies drew down credit lines as debt markets seized up early in the coronavirus pandemic. But they grew only 2% to 3% over the past two quarters.</p> <p>For investors who have driven up banks’ shares to record highs this year, the uncertain outlook may cause some angst. The Canadian bank index has rallied nearly 50% over the past year, versus a 31% increase in the broader index. But the bank index has underperformed the broader market since lenders began reporting results last week.</p> <p>‘<span class="caps">HISTORICAL</span> <span class="caps">LOWS</span>’</p> <p>“I would have expected … that (business) inventory and receivable build would have led to (credit) drawdowns, and you’re not seeing that,” Neil McLaughlin, head of personal and commercial banking at Royal Bank of Canada, said on an analyst call last week. “It’s already kind of lagging, but it will come.” </p> <p>National Bank of Canada executives said deposits were “stickier” than they had expected at the beginning of the pandemic, with businesses not spending all the cash they hold. </p> <p>“Drawings on operating lines … are at historical lows,” said Stephane Achard, executive vice president of commercial banking and insurance at the bank. “I would expect those to remain low and gradually creep up over time.”</p> <p>The six banks beat estimates for second-quarter profit, driven by lower-than-expected provisions for credit losses and strong capital market performances.</p> <p>While earnings from capital markets businesses, which have “stepped up to fill the void in traditional banking businesses,” could moderate, they should remain strong, given continued volatility in markets and dealmaking, helping offset some of the lag in lending, Clare said. </p> <p>($1 = 1.2059 Canadian dollars)</p> <p/> </div>