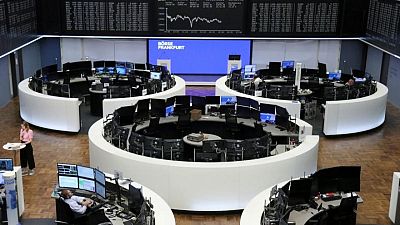 <div> <p>By Sruthi Shankar and Shreyashi Sanyal</p> <p> -European stocks hit fresh record highs on Tuesday, as strong metal and oil prices boosted shares of big commodity companies, and data showed euro zone manufacturing activity expanded at a record pace in May.</p> <p>The pan-European <span class="caps">STOXX</span> 600 index gained 0.8% in the first trading session of June, with UK’s blue-chip index rising 0.8% after a holiday on Monday.</p> <p>The German <span class="caps">DAX</span> jumped 1.0% to a new record high, while France’s <span class="caps">CAC</span> 40 added 0.7%. </p> <p><span class="caps">IHS</span> Markit’s final reading of euro zone’s factory activity rose to 63.1 in May, above an initial 62.8 “flash” estimate and the highest since the survey began in June 1997.</p> <p>The survey suggested growth would have been even faster without supply bottlenecks that have led to an unprecedented rise in input costs.</p> <p>While investors worry that higher inflation could force the European Central Bank to dial back its stimulus measures, policymakers have said in recent weeks that the rise in prices is transitory and have reaffirmed continued support.</p> <p>“We’ve had the Fed and <span class="caps">ECB</span> say they expect a surge in inflation as economies open up,” said Keith Temperton, a sales trader at Forte Securities. </p> <p>“It will become a problem once the economies have opened up and numbers continue higher. Until then, the market is embracing what we’re seeing.” </p> <p>Euro zone inflation surged past the <span class="caps">ECB</span>’s elusive target in May, heightening a communications challenge for policymakers who will happily live with higher prices for now but may face a backlash from irate consumers.</p> <p>“Most of the rise is due to temporary factors, including higher energy inflation, and we expect the headline rate to drop back to well below the <span class="caps">ECB</span> target next year,” said Andrew Kenningham, chief Europe economist at Capital Economics. </p> <p>Miners such as Anglo American, <span class="caps">BHP</span> Group and Glencore climbed nearly 4% each, giving the biggest boost to the <span class="caps">STOXX</span> 600 as prices of copper and other metals rose. [MET/L]</p> <p>Oil majors BP, Royal Dutch Shell and Total rose as Brent crude futures hit its highest since March on optimism over fuel demand outlook. [O/R]</p> <p>The benchmark <span class="caps">STOXX</span> 600 ended May with a 2% gain, its fourth straight monthly rise, as optimism about economic reopening drove investors toward economically sensitive sectors such as materials and energy. </p> <p>German carmaker Daimler rose 2.6% after it agreed to pay Nokia for using its patents, ending a row over royalties for key technologies.</p> </div>