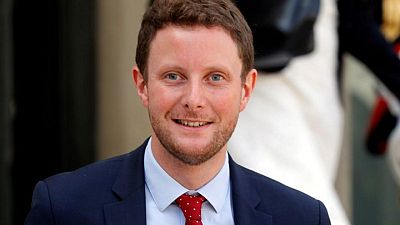 In an interview with French financial daily Les Echos, Beaune also said that more than 100 billion euros would be injected into the European economy from this year.

Beaune said the European Commission would launch the debt issuance process on June 1 by calling on big European and international banks, and the securities would be issued in June.

“The market appetite should be very major and the interest rates very favourable,” he told Les Echos.

Asked whether the new bonds would be called corona-bonds, he said “let’s avoid this radioactive term”, and added that with the recovery package an embryonic European Union treasury was taking shape.

Proceeds of the issue would be spent from July onwards and by the end of the year Europe will inject more than 100 billion euros into its economy to finance the recovery of its member states, he said.

Asked about a G7 initiative for a minimum corporate tax rate of 15%, he said that within the European Union, Ireland was the most hostile to the principle of a minimum tax and taxation of internet companies, and to a lesser degree Cyprus and Malta.

He added that the Netherlands was not opposed to the principle but will be demanding about its implementation.

“The European Union is blocked because of the unanimity rule. When there is a legal blockage, we need a political battle … given the U.S. position and the global agreement that we hope for in July, this will put a lot of political pressure on the reticent member states,” he said.