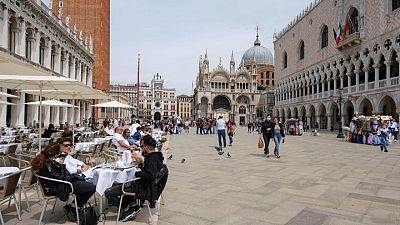 ROME – The Italian government approved a decree on Friday setting out how it will oversee investments funded by the European Union and accelerating procedures for public works, a key step in unlocking the EU funds.

The reforms were promised to the European Commission to get a green light for Rome’s Recovery Plan and obtain a first tranche by August of the 205 billion euros ($250 billion) in grants and cheap loans it is due to receive from Brussels.

The decree, which was the subject of tense negotiations with trade unions, will now be sent to the Commission for approval.

Italy, which presented its Recovery Plan last month, is the biggest beneficiary of the 750 billion euro kitty set up to help the bloc’s 27 countries recover from the COVID-19 pandemic.

Governance of the plan will be run by Prime Minister Mario Draghi, key ministers and cabinet undersecretaries, while the Treasury is responsible for drawing attention to any hitches in the progress of investments.

A separate audit body at the state accounting office is charged with preventing cases of fraud, corruption or conflict of interest, the prime minister’s office said in a statement late on Friday.

Draghi will have extensive powers to appoint special commissioners if any goals in the plan are at risk.

With an election due in 2023 at the latest, the decree also sets up a “technical body” at the cabinet office that will remain in place until 2026 to ensure investment projects are put into practice even after the government changes.

The Recovery Fund money will arrive in gradual instalments conditional on further Italian reforms of areas including the tax system, justice reform and antitrust measures according to a pre-defined, strict timeline.

Friday’s decree pulls together two strands that were originally supposed to be separate pieces of legislation – one on the governance of the Recovery Plan and the other on simplification of bureaucratic procedures for investments.

In the simplification package, which Draghi had initially promised the EU would be adopted by May 20, some measures make it simpler to authorise new renewable energy projects such as small solar facilities.

Others aim to accelerate ultra-fast connectivity across the country, with one reducing to 90 days from six months the time it takes to authorise the installation of fixed and mobile telephony equipment.

A main point of contention with trade unions regarded plans to make it easier for firms that win public tenders to issue sub-contracts to carry out the projects. Unions said this would lead to lower wages and exploitation of workers.

The cabinet finally decided to raise until Oct. 31 the threshold allowed for subcontracted work to 50% of the value of a tender, from the current ceiling of 40%.

After that date the threshold will be lifted altogether, meaning all work can be subcontracted. The government promised future measures to strengthen guarantees for workers and prevent the potential involvement of organised crime groups.