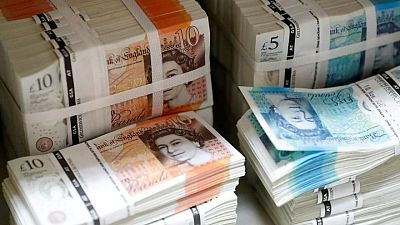 LONDON -Sterling edged lower against the dollar on Friday, but remained on track for it latest weekly gain following Bank of England comments this week on the timing of rate hikes.

Versus the euro, it was flat at 85.90 pence and set for five consecutive weekly gains versus the single currency.

BoE policymaker Gertjan Vlieghe said on Thursday the central bank was likely to raise rates only well into next year, while noting an increase could come earlier in 2022 if the economy rebounds more quickly than expected.

“GBP found some support yesterday in the comments from the BoE’s Vlieghe which were interpreted as having a hawkish tone,” said Jane Foley, Head of FX Strategy at Rabobank.

“This has focused attention on the BoE meeting later in June and whether the BoE is prepared to start focusing on a potential roll-back of stimulus,” she added.

ING analysts noted that Vlieghe laid out three scenarios but the market only reacted to the hawkish one.

Sterling is one of the top-performing G10 currency versus the dollar in 2021, up almost 4% year-to-date as investors bet on a quicker reopening for Britain’s economy thanks to its COVID-19 vaccination programme.

Britain started the third stage of its reopening last week, allowing indoor dining in pubs and restaurants. Economic indicators including retail sales, surveys of purchasing managers and employment measures are looking up.

But analysts said a lot has been already priced in.

“News that the full re-opening of the UK economy in June is ‘in the balance’ may hold GBP back temporarily, though cable now looks well supported at $1.41,” ING said.