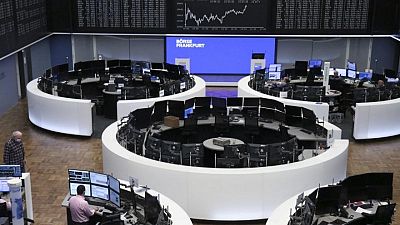 -European shares were trading flat on Thursday as investors awaited key U.S. labour data, while German shares fell the most on losses in pharmaceuticals maker Bayer after an unfavourable court ruling.

The pan-European STOXX 600 index was largely unchanged at 445.47 points, hovering just below a record high of 447.15 hit on Tuesday.

German shares shed around 0.4%, lagging their regional peers. Bayer was the biggest drag on the DAX, falling more than 4%.

The stock was set for its worst day in three months after a U.S. judge rejected its class action plan to settle future claims related to its Roundup and other glyphosate-based weedkillers.

European shares have moved little this week, but were able to eke out record highs as continued affirmations of easy monetary policy and waning concerns over inflation painted an accommodative picture for equities.

Investors are now awaiting U.S. jobless claims data, which is due later in the day and personal consumption data on Friday, two important metrics considered by the Federal Reserve in adjusting policy.

“Market participants stayed relatively indecisive ahead of tomorrow’s release of the core PCE index, which is the Fed’s favourite inflation metric,” Charalambos Pissouros, senior market analyst at JFD Group wrote in a note.

“If (policymakers) stick to their guns that the surge in inflation is likely to prove to be temporary and that it’s not the time to consider normalization yet, equities and other risk-linked assets are likely to rebound and continue trending north.”

Food and beverage stocks were the worst performers, falling 0.5% on losses in British processed foods maker Tate & Lyle. The stock shed more than 5% after its annual revenue fell.

Among other movers, British bank HSBC fell 0.2% after the lender said it was exiting its U.S. retail banking business to focus on Asia, its biggest market.

German sportswear firm Puma fell 2% after French luxury goods group Kering said it will sell a 5.9% stake in the firm through a share placement.