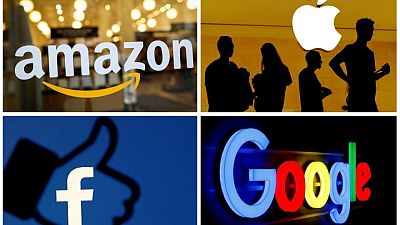 BRUSSELS -Draft rules targeted at Alphabet unit Google, Facebook, Amazon and Apple should be beefed up to allow regulators to vet their acquisitions of start-up rivals, Germany, France and the Netherlands said on Thursday.

Tech giants have faced criticism from some for so-called killer acquisitions where they buy nascent rivals with the goal of shutting them down.

Regulators should use the proposed Digital Markets Act (DMA) to address this issue, the ministers said.

“First, setting clear and legally certain thresholds for acquisitions by gatekeepers of targets with relatively low turnover, but high value,” they said.

They said the proposed rules should allow leeway for EU countries to tackle so-called online gatekeepers and anti-competitive behaviour.

The draft rules could come into force next year once the Commission, EU countries and EU lawmakers have thrashed out a common position.

France also wants the European Union to toughen up rules on illegal content by forcing technology firms to systematically hand over illegal content they have removed or blocked from their sites to authorities.

France has proposed that online hosting services be obliged to store illegal content for at last six months, and transfer it to law enforcement authorities in the relevant country, according to drafts of its amendments seen by Reuters.

The move would reinforce the oversight powers of individual members states, although that could raise hackles if there are concerns about too many regulators jostling within the EU.