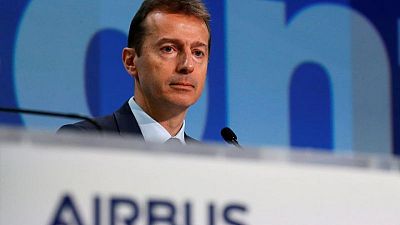 PARIS – The head of Europe’s Airbus urged suppliers to prepare industrially and financially for steep increases in jet output floated earlier on Thursday, and said the industry was returning towards pre-crisis trends for its most popular airplanes.

“It is just there. The pent-up demand is very strong for those flights,” Chief Executive Guillaume Faury told Reuters in an interview

“That is why we are sharing (production scenarios) with them and we are asking them to be prepared, and they have the means to do that. There is a lot of liquidity in the market.”

Faury’s comments came as Airbus firmed up plans for increased output in 2021 and issued a mix of firm targets and provisional scenarios that could almost double single-aisle output by 2025, sending its shares sharply higher.

Investors hailed a bounce-back for an industry battered by the coronavirus crisis, but several suppliers have talked of a standoff with Airbus about who should pay for investments needed to get single-aisle output back to pre-crisis levels and beyond.

Faury said the unusually detailed output plan would reassure suppliers that everyone was sharing the same burden.

Analysts say tough negotiations over the balance between upfront machinery investments and the promise of profits from future high volumes is common. But the discussion has intensified after the crisis hit finances of many suppliers.