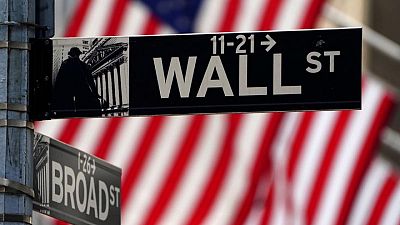 Investors weighed the Fed’s soothing words that put to rest tapering worries for the time being and helped to drive the dollar to four-and-a-half-month lows. The benchmark 10-year Treasury note also hit two-week lows and was at 1.56% in afternoon trading, down from 1.608% late on Monday.

The yield curve flattened for a fourth straight session, as participants bought the long end of the curve on the view that price pressures would be stable for the rest of the year.

“People are starting to come around to the notion that the Fed is right to be careful about inflation because of the difficulties of COVID around the world,” said Jamie Cox, Managing Partner at Harris Financial Group in New York.

On Monday, Fed Board Governor Lael Brainard assuaged inflation concerns, saying she expects that price spikes associated with supply bottlenecks and the reopening of the economy to “subside over time.”

James Bullard, president of the St. Louis Federal Reserve, also said on Monday that while still in the pandemic, it was not the time to talk more about changing the parameters of monetary policy.

Those messages were consistent with what Fed Chairman Jerome Powell has said repeatedly over recent weeks.

On Wall Street, all three benchmark indexes closed lower on Tuesday as concerns over the speed and trajectory of the rise in prices persisted among traders.

Some of the most active sectors on Wall Street include technology, industrials, customer discretionary, communication services and real estate.

“The reason why we are having some inflationary pressures is because Asia is having difficulties and that will work itself out and I think price increases like that are not long lasting,” Cox said.

Overnight in Asia, the region’s main regional equity gauges climbed, with MSCI’s broadest index of Asia-Pacific shares outside Japan up 1.5% at a two-week high.

Oil prices edged a shade higher on Tuesday as rising demand from the approach of the Northern Hemisphere’s summer driving season and lifting of coronavirus restrictions offset worries that Iran’s possible return to the market will cause a supply glut.

The dollar index, which measures the currency against major rivals, was down 0.2% in the afternoon session, after having fallen as much as 0.3% to 89.533, its lowest since Jan. 7.