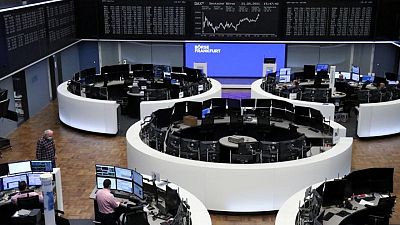 (Reuters) -European stocks closed flat on Tuesday, as a billion-dollar German property deal and a rally in technology shares were offset by losses in major mining stocks due to concerns over Chinese markets.

The pan-European STOXX 600 index ended largely unchanged at 445.20 points, after hitting a record high of 447.15 earlier in the day.

Germany’s DAX rose 0.2%, having hit a record high earlier in the day on news that Europe’s largest residential property group Vonovia SE agreed to take over its rival Deutsche Wohnen for about 18 billion euros ($22 billion).

A lessening of inflation fears saw euro zone government bond yields edge down for the third day in a row. [US/]

“In the last couple of days, bond yields have come down a little bit and that has allowed equity markets to breathe again,” said Roland Kayolan, European equity strategist at Societe Generale.

“We’re still in a phase where economies are reopening gradually in Europe and we should see better leading indicators in the coming months.”

Miners lagged their European peers with a 1.7% loss, as China said it would strengthen price controls of key commodities after warning against hoarding and speculation to cool a blistering rally in prices of industrial commodities.

Investors weighed data that showed the German economy shrank more than expected in the first quarter against improving business morale in May, with companies turning more upbeat in the light of falling coronavirus infections and steps towards re-opening.

Europe’s STOXX 600 is up about 12% so far this year, largely in line with Wall Street’s S&P 500 as re-opening optimism lifted shares of economically sensitive sectors such as financials and energy.

British rail operator Trainline fell 8.3%, the most on the STOXX 600, after Stifel downgraded the stock, citing uncertainty to the firm’s activities after the British government formed a new railway operator last week.