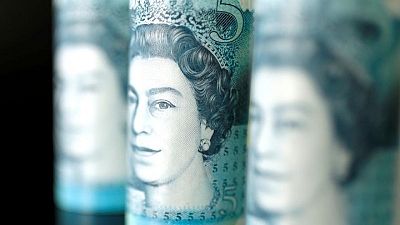 LONDON (Reuters) -Britain’s pound held within recent ranges on Monday, trading just shy of $1.42 as analysts set their eyes on an address by four Bank of England policymakers to a parliamentary sub-committee.

Bank of England Governor Andrew Bailey, in an annual report to parliament’s Treasury Committee, said on Monday he does not see long-term implications from an expected pick-up in inflation as the economy emerges from the coronavirus pandemic.

Michael Saunders, another BoE policymaker, said that he expected the BoE would need to raise interest rates modestly over the next three years if the economy grew as strongly as forecast.

Gains in recent weeks have brought the pound back within touching distance of a nearly three-year high of $1.4240 against the dollar, a level it reached in February this year.

Bets that Britain’s COVID-19 vaccine rollout will enable a quicker reopening of its economy have kept those gains intact, and left sterling the second best performing G10 currency against the dollar this year, trailing only the commodity-driven Canadian dollar.

After three national lockdowns, Britain has been able to reopen its economy according to the government’s planned schedule so far, although concerns remain about the variant of the coronavirus first discovered in India.

Economic data has also been encouraging for the pound’s outlook, with strong retail sales and surveys of purchasing managers beating consensus forecasts.

“GBP is holding onto recent gains well. Recent reports suggest vaccines are effective on the Indian variant and that the UK economy is still on track for a full reopening on June 21st,” ING said in a note to clients.

The strategists added that they saw a window for the pound to punch above the $1.4235 resistance level this week.