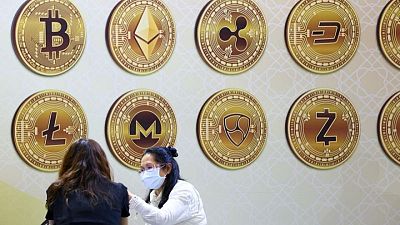 By Howard Schneider and David Lawder

WASHINGTON (Reuters) – U.S. Federal Reserve chief Jerome Powell turned up the heat on cryptocurrencies on Thursday, saying they pose risks to financial stability, and indicating that greater regulation of the increasingly popular electronic currency may be warranted.

The Treasury Department, meanwhile, flagged its concerns that wealthy individuals could use the largely unregulated sector to avoid tax and said it wanted big crypto asset transfers reported to authorities.

The back-to-back announcements came in a week when Bitcoin, the most popular cryptocurrency, took a wild ride, falling as much as 30% on Wednesday after China announced new curbs on the sector, underscoring the volatility of the sector.

Powell underlined cryptocurrency risks in an unusual video message https://www.federalreserve.gov/newsevents/pressreleases/other20210520b.htm that also laid out a clearer timetable as the Fed explores the possibility of adopting a digital currency of its own.

While highlighting the potential benefits of advances in financial technology, Powell said cryptocurrencies, stablecoins and other innovations “may also carry potential risks to those users and to the broader financial system.”

As the technology advanced, “so must our attention to the appropriate regulatory and oversight framework. This includes paying attention to private-sector payments innovators who are currently not within the traditional regulatory arrangements applied to banks, investment firms, and other financial intermediaries.”

Powell’s comments signaled how seriously the Fed has been forced to reckon with the surge in popularity and market values of non-traditional currency options such as Bitcoin, especially as it looks at developing a digital version of the U.S. dollar, the world’s reserve currency.

The Fed and Treasury consider cryptocurrencies, which now have a market capitalization of about $2 trillion, to be more like art, gold or other highly speculative assets.

A central bank digital currency, though, offers whoever holds it – a person, a business, even another government – a direct claim on that central bank, which is exactly what holding a paper dollar bill does now.

Powell said the Fed would release a discussion paper this summer on digital payments, with a focus on the benefits and risks of establishing a central bank digital currency, and will also seek public comment.

He noted that “to date, cryptocurrencies have not served as a convenient way to make payments, given, among other factors, their swings in value.”

Its proposal, disclosed as part of a policy report https://home.treasury.gov/system/files/136/The-American-Families-Plan-Tax-Compliance-Agenda.pdf detailing the Biden administration’s $80 billion IRS enforcement proposal to boost revenue collection, would provide additional resources for the IRS to address crypto assets,

In addition to the reports of $10,000-plus cryptocurrency transfers that would parallel bank reports of similarly sized cash transfers, the Treasury also proposed that crypto asset exchanges and custodians also report transactions to the IRS related to bank interest, dividend and brokerage transactions.

The reporting requirements, depending on how they are structured, could also allow the government to gain insight about U.S. companies that are extorted to pay hackers ransoms, almost invariably in cryptocurrency, to regain control of their IT systems.

Law enforcement and private sector cybersecurity experts alike have complained that a lack of transparency around these ransomware incidents contributes to their continued occurrence.

The Treasury disclosure took the wind out of a rally in the dollar value of Bitcoin on Thursday that followed steep plunges for Bitcoin and etherium on Wednesday. Bitcoin was up 8.7% in afternoon trade after an earlier gain of 10%.

While the Fed and some other developed economies are still conducting research on what a central bank digital currency would look like, China is moving ahead at a fast clip and is currently piloting a digital version of the yuan, with plans to ramp up usage before the 2022 Winter Olympics in Beijing.

Powell said last month that the Fed would not rush its efforts in response to China’s more aggressive pace, noting that the approach taken there would not work in the United States.

“It is far more important to get it right than it is to do it fast,” Powell said after the April policy setting meeting.

The Boston Fed is currently working with the Massachusetts Institute of Technology to research the technology that could be used for a central bank digital currency and will be releasing those findings in the third quarter.

Congressional action would be required before a digital currency could be developed.

Also on Thursday, U.S. Securities and Exchange Commission Chair Gary Gensler said he would like to see more regulation around cryptocurrency exchanges, including those that solely trade bitcoin and do not currently have to register with his agency.

“This is a quite volatile, one might say highly volatile, asset class, and the investing public would benefit from more investor protection on the crypto exchanges,” he said at the Financial Industry Regulatory Authority’s annual conference.