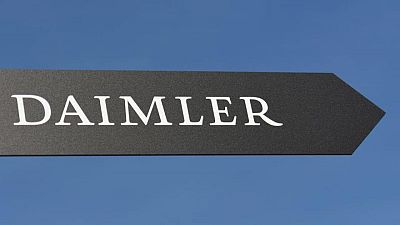 LONDON (Reuters) – The transition to zero-emission fuel cell trucks will slash about half the jobs at Europe’s truck engine plants in the next 15 years, Daimler Truck Chief Executive Martin Daum said on Friday, urging policymakers to prepare for that now.

Truck makers are moving towards a zero-emission world as hitting sustainability targets becomes more important for their customers but the fuel cells have fewer moving parts and require less labour to make than combustion engines.

“We have to be cognizant that about 50% of the jobs will go away because a fuel cell and a battery are far less complex than a diesel engine and a transmission today,” Daum told Reuters.

“But the good thing is, we have a transition period of about 15 years and we have to start preparing for that today.”

The world’s largest truck maker is going “all-in” for electric and hydrogen fuel cell-powered vehicles and on Thursday said zero-emission vehicles should make up 60% of its sales by 2030 and 100% of sales by 2039.

However, Daum said building hydrogen fuelling infrastructure is crucial to persuade sceptical fleet operators to buy the trucks that will help Europe meet its climate goals.

“If we already had the trucks today that we will have in 2025 and beyond, we wouldn’t sell a single one. Why? Because we have no hydrogen fuelling network,” he said.

This week Daimler AG’s truck unit announced an agreement with Shell under which from 2024 the oil major will launch heavy-duty hydrogen-refuelling stations between the green hydrogen production hubs at the Port of Rotterdam in the Netherlands and in Cologne and Hamburg in Germany.

“The fear of running out of power is the issue where the customer is the most sceptical,” Daum said. “The decisive edge will be the availability of fuelling infrastructure.”

Carmaker Daimler will spin off Daimler Truck later this year as it seeks greater investor appeal as a focused electric, luxury car business.

Ahead of that spin-off, Daimler Truck said this week it would focus on raising profit margins by 2025, in particular in Europe.

“We have a good product in Europe, it’s too expensive to produce,” he said. “So we have to get the complexity out of the product.”