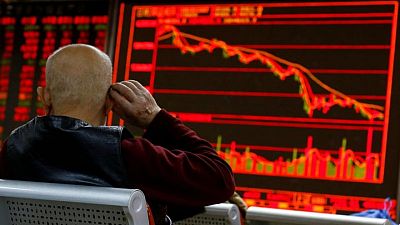 NEWYORK (Reuters) – A selloff in cryptocurrencies, high-growth stocks and other high-flying assets may be signalling a more cautious outlook among market participants after a stretch of rampant exuberance, investors and analysts said.

Few believe the bull run that broader U.S. stock markets have experienced over the past year is set for a reversal. Still, concerns are growing that a looming rise in inflation combined with a potential peak in U.S. economic growth could force investors to cut down on risk in their portfolios, hurting many of the assets that shot higher earlier this year.

“Higher-risk assets, whether in the form … of cryptocurrencies or the more speculative growth stocks, are seeing their multiples taken down markedly as investors begin to reassess what impact the potential for inflation will have,” said David Mazza, managing director at Direxion.

Wednesday’s selloff zeroed in on many of the assets that rallied the most over the last year. Bitcoin dropped to its lowest levels since January, while Cathie Wood’s ARK Innovation ETF – the top-performing U.S. equity fund in 2020 – slid another 2.5% to leave it down 15.3% since the start of the month. Bitcoin is up 34% for the year to date while ARK is down 17.2%.

Minutes from the Federal Reserve’s latest meeting, released on Wednesday afternoon, showed that a “number” of Fed officials appeared ready to consider changes to monetary policy based on a continued strong economic recovery – a potential negative for risk assets that have thrived from unprecedented stimulus. That meeting, however, took place before the release of April’s anemic job data.

“They were thinking about thinking about tapering (quantitative easing) asset purchases if the economy continues on this rapid recovery and they get closer to meeting the dual mandates,” said Kathy Bostjancic, chief U.S. financial economist at Oxford Economics. “Our view is they probably pre-announce tapering at Jackson Hole in August and they actually start to taper back the asset purchases at the beginning of next year.”

Fed officials have pledged to keep their ultra-loose, crisis-fighting policies in place, betting that the unexpected surge in consumer prices last month stems from temporary forces that will ease on their own.

“We think there’s still more room to run but that doesn’t mean that there wasn’t froth in certain parts of the market,” said Brian Jacobsen, a senior investment strategist for the Multi-Asset Solutions team at Wells Fargo Asset Management. “This bull market came out of the gate really quickly and you are bound to get some muscle cramps along the way.”

Concerns over inflation – or at least how investors will react to signs of rising consumer prices – have proliferated in recent weeks.

Fund managers in a survey from BoFA Global Research released on Tuesday named inflation as the top risk to markets, while BlackRock Inc, the world’s largest asset manager, said a market overreaction to an inflation overshoot is a risk accompanying its recommendation of an overweight equity position.

“The recent sell-off in tech shares, despite strong first-quarter earnings, illustrates the potential for hitting air pockets as the economic restart unfolds,” the firm said earlier this week. “This may create opportunities in a sector benefiting from structural trends.”

Mazza, of Direxion, expects that inflation worries will be short-lived, leaving some of the growth names that have sold off in May more attractive over the next 12 months.

“It’s very difficult to see a situation where value continues to outperform growth by the same extent through 2022,” he said.