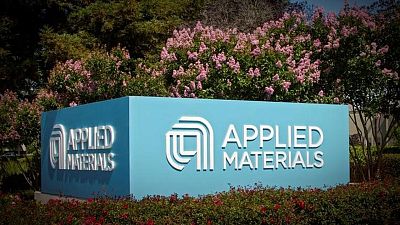 (Reuters) -Applied Materials Inc forecast third-quarter sales above analysts’ estimates on Thursday, betting on sustained demand for its semiconductor manufacturing tools against the backdrop of a global chip shortage.

The company also got a boost from a pick up in demand for laptops, PCs and gaming consoles globally during the pandemic, as people began to lean more on technologies for virtual interaction.

Applied Materials expects current-quarter net sales of $5.92 billion, plus or minus $200 million, compared with estimates of $5.54 billion, according to IBES data from Refinitiv.

With the semiconductor industry grappling with a shortage in chip supplies, automakers are facing production disruptions, while chipmakers such as Qualcomm Inc are finding it hard to keep up with the increased demand.

Analysts say Applied Materials could also benefit in the next several years from efforts in several countries, including the United States, to subsidize chip factories.

Revenue from Applied Materials’ semiconductor systems unit, which supplies gears to chip makers, was $3.97 billion in the reported quarter, above FactSet estimates of $3.86 billion.

On an adjusted basis, the company earned $1.63 per share, compared with estimates of $1.51 per share, according to Refinitiv data.

Applied Materials’ shares fell nearly 1% to $129.25 in extended trading. The stock was up 4% during regular trading ahead of the results.

(Reporting by Tiyashi Datta in Bengaluru and Stephen Nellis in San Francisco; Editing by Shounak Dasgupta)