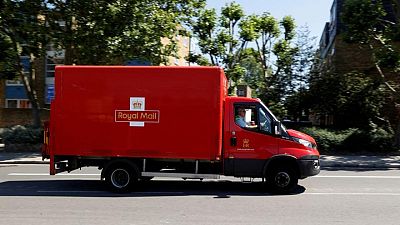 (Reuters) -Royal Mail on Thursday held back from providing a forecast for the current year, citing uncertainties that could influence the number of packages it delivers following a year that saw its profit more than double during the lockdown.

While annual revenue topped expectations, the postal company’s profit slightly missed estimates as it dealt with higher costs to cater to the surge in parcel volumes.

Royal Mail said its parcel volumes in the UK were down 2% last month, compared with the surge in online shopping in April 2020 when the first lockdown was in place.

The British company witnessed its fortunes turn last year as the pandemic, which forced shut brick-and-mortar stores and caused a surge in online shopping, came as a boon to its home delivery service and struggling UK business.

“As the outlook for 2021-22 contains a number of uncertainties that could significantly influence volumes and costs it is difficult to provide specific guidance for 2021-22 for Royal Mail,” Chairman Keith Williams said.

Analysts on average had estimated adjusted group operating profit of 704 million pounds and revenue of 12.58 billion pounds, according to a company-compiled consensus.

(Reporting by Yadarisa Shabong in Bengaluru, Editing by Sherry Jacob-Phillips)