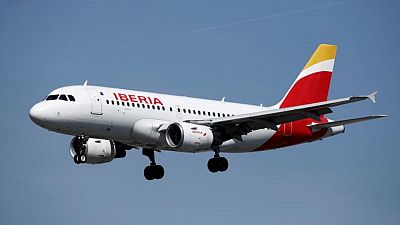 MADRID (Reuters) – Iberia, the Spanish arm of IAG airline group, expects its monthly flights to reach 60% of 2019 levels by July, as travel starts to recover from the COVID-19 pandemic.

This month, Iberia is flying at 40% of May 2019 levels and expects to reach 50% of the last pre-pandemic June next month, Commercial Director Maria Jesus Lopez Solas told reporters on Thursday during the FITUR tourism trade fair in Madrid.

CEO Javier Sanchez Prieto said Spain needed to open up to the rest of the world, especially Latin America, following months of restrictions to air travel imposed to curb COVID-19.

The decision to reopen routes between Spain and Latin America should come within weeks, Prieto said.

The flag carrier wants to increase flights to Asia from Spain – now only 5% of the total – hoping to bring Madrid’s Barajas airport in line with other European hubs, which average 20-25% of flights to Asia.

Iberia hailed the European Commission’s recommendation that travel to third-party countries resume, but decried environmental taxes included in a plan presented by Spain to the EU’s executive arm to access some 14 billion euros in recovery funds.

“There’s a demonisation of airlines which will penalise the whole value chain,” Lopez-Solas said.

Iberia will become one of IAG’s two Spanish brands as the group seeks to add rival Air Europa to its roster, with the deal to be executed in the second half of 2021, chief executive Sanchez-Prieto said.

Asked whether having both Spanish airlines under the same umbrella would lead to layoffs, Sanchez-Prieto praised Spain’s pandemic-era furloughs before replying: “We’ll see – the final vision is that no-one be in excess, and for now we’re competitors, growing in parallel.”