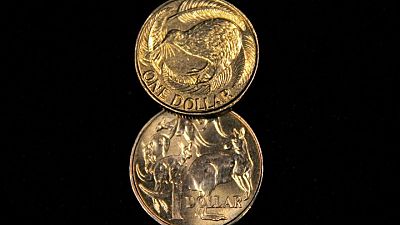 SYDNEY (Reuters) – The Australian dollar climbed on Thursday after labour force data showed a faster-than-expected decline in unemployment in April, while the New Zealand dollar gained as well.

The Australian dollar jumped to a day’s high of $0.7750 from a one-week low of $0.7710 on Wednesday after official figures showed the jobless rate had slipped to a one-year trough of 5.5% compared to economists’ forecast of 5.6%.

The details were positive too with full-time jobs rising by 34,000 and the underemployment rate diving to 7.8%, even though overall employment surprisingly dropped by 30,600, confounding expectations for a 15,000 gain.

Analysts were circumspect about whether the tightness in the labour market would spur faster pay hikes and consumer prices. The Reserve Bank of Australia (RBA) has said it will not raise interest rates until actual inflation was within its 2%-3% target band.

“What is still uncertain is the strength of the transition from lower underutilisation to higher wages growth, and then to inflation,” economists at ANZ Banking Group wrote in a note.

“The wage data earlier in the week was slightly stronger than expected, annualising at 2.4% y/y. While still below the RBA’s 3% yardstick, the gap is narrowing, which has implications for the timing and speed of RBA policy changes,” they added.

Interest rate futures are pointing to a 60% probability of a 15 basis point interest rate hike in 2022 to 0.25%, earlier than the RBA’s projection that any tightening is unlikely before 2024 at the earliest.

AMP Chief Economist Shane Oliver says a rate increase could come earlier than 2024 “but it’s still going to be not until 2023” as there is still plenty spare capacity in the labour market.

Earlier, New Zealand released its annual budget in which it lifted welfare payments by up to NZ$55 per adult, which the government said was the biggest hike in a generation.

Ratings firm S&P Global said the budget met its expectations, though it warned debt levels would remain elevated for some time.

Australian government bond futures rose, with the three-year bond contract and the 10-year contract up 1.5 ticks each at 99.755 and 98.30, respectively.