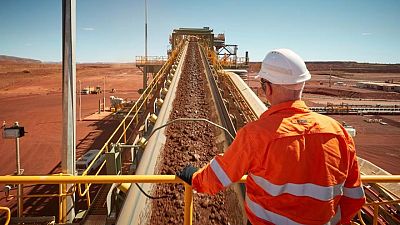 MELBOURNE (Reuters) – BHP Group has produced its first iron ore at its $3.6 billion South Flank operations in the central Pilbara region of Western Australia, it said on Thursday.

South Flank will produce 80 million tonnes per year of iron ore to replace diminishing output from the existing Yandi operation. South Flank, alongside BHP’s Mining Area C, will form the largest operating iron ore hub in the world, producing 145 million tonnes of the steel-making material each year, the company said in a statement.

It comes as iron ore prices reached records above $230 a tonne this month driven by China’s industrialisation drive as it emerges from the COVID-19 pandemic that has led to a surge in demand for steel, as well as supply constraints from Brazil.

“South Flank is Australia’s largest new iron ore mine in over 50 years and is on time and on budget,” said BHP’s President Minerals Australia Edgar Basto.

The ore, mined from the lands of Aboriginal partners the Banjima people, will improve BHP’s average iron ore grade to 62% iron content from 61% and the overall proportion of high grade lump to 30% to 33% from 25%.

“This is a major project that is creating thousands of jobs and again shows why the resources sector is so important to our national economy,” said Australian Minister for Resources Keith Pitt.

Booming iron ore prices have fed Australia’s coffers despite rising tensions with its biggest trading partner China that have impacted other minerals exports such as coal. Australia is the world’s biggest supplier of iron ore.

In the state of Western Australia, royalties for the country’s most valuable export topped A$5 billion ($3.87 billion) in the six months to Dec. 31, 2020, according to federal government data.