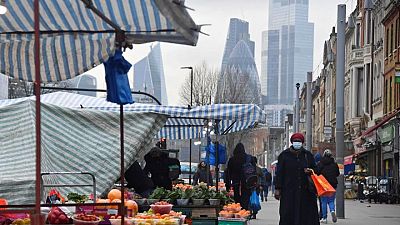 LONDON (Reuters) -British consumer price inflation more than doubled in April at the start of what the Bank of England hopes will be a temporary surge as the economy recovers from last year’s COVID slump.

Consumer prices rose by 1.5% in April, the Office for National Statistics said, following a 0.7% rise in March.

A Reuters poll of economists had pointed to an increase of 1.4%.

A jump in regulated electricity and gas bills and clothing and footwear prices helped to push inflation up, along with the cost of petrol, hit by rising global oil prices.

Inflation is expected to accelerate in the coming months – mirroring a move underway in the United States as the global economy picks itself up after the COVID-19 pandemic.

“With inflation set to pick up further over the coming months and the economy looking poised for decent recovery from the second quarter, attention is increasingly focusing on when the Bank of England could start to tighten monetary policy rather than will the Bank provide further stimulus,” Howard Archer, an economist with forecaster EY Item Club said.

“However the Bank of England did not appear to be in a hurry to tighten policy in the minutes of the May MPC meeting.”

Core inflation, which excludes energy prices and other volatile items, rose by 1.3% in the 12 months to April, the Office for National Statistics said.

The BoE says inflation in Britain is heading above its 2% target and will hit 2.5% at the end of 2021 thanks to the rise in global oil prices and the expiry in September of COVID emergency cuts to value-added tax in the hospitality sector, as well as comparisons with the COVID slump of 2020.

Wednesday’s data showed prices charged by manufacturers rose by 3.9% in the year to April, the biggest increase in two-and-a-half years, and the prices they paid for their inputs rose by 9.9%, the most since February 2017.

BoE Governor Andrew Bailey said on Tuesday there had been little sign so far that these producer cost pressures had fed much into consumer prices in Britain.

Last week, data showed U.S. consumer prices jumped to an annual rate of 4.2% in April, the strongest inflation rate since 2008, prompting investors to up their bets on the Federal Reserve raising interest rates sooner than it had signalled.