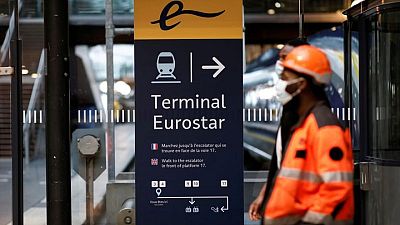 PARIS (Reuters) – Train operator Eurostar has secured a 250 million pound ($355 million) refinancing deal from its shareholders and banks to help it manage the impact of the COVID-19 crisis, it said in a statement on Tuesday.

Eurostar said the COVID-19 pandemic had affected it more than any European railway operator or competing airline, and that the support package would help it meet its financial liabilities.

“This refinancing is a major step towards securing Eurostar’s future,” Eurostar Chief Executive Jacques Damas said in a statement.

It also includes 50 million pounds of credit facilities that have been restructured.

Eurostar is 55% owned by French national railway company SNCF and 40% by the Patina Rail LLP consortium, which is made up of Canadian investment fund Caisse de depot et placement du Quebec and funds managed by Federated Hermes.

From May 27, Eurostar will increase its services to two daily London-Paris return trips, with a third daily trip planned from the end of June, and will boost circulation over the summer as travel limits are relaxed.

Eurostar runs the London to Paris and London to Brussels rail services that go through the Channel Tunnel.