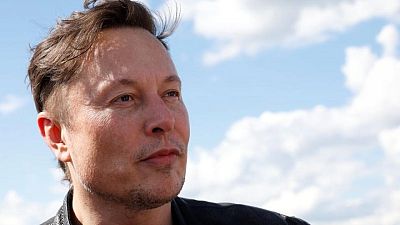 <p><body> <p><span class="caps">BERLIN</span> (Reuters) – Tesla Chief Executive Elon Musk called for cuts to German red tape on Monday as he said it was unclear when exactly the first electric car would roll off the production line of its planned plant outside Berlin.</p> <p>Last month Tesla delayed the opening of its first European gigafactory to late 2021 from an initial July 1 date after adding plans to also establish a battery cell plant on site as well as a lengthy approval processes..</p> <p>“It’s hard to predict with precision cause you can only make the cars when all of the pieces are here,” Musk said during a visit to the Gruenheide site in the German state of Brandenburg.</p> <p>“It looks like we’re able to start production end of this year,” Musk added.</p> <p>Home to traditional carmaking rivals Volkswagen, Daimler and <span class="caps">BMW</span>, Germany is also known for its complex regulation and bureaucracy.</p> <p>“I think there could be less bureaucracy, that would be better,” Musk told reporters at the Gruenheide site, adding that rules were “immortal”.</p> <p>Brandenburg’s Economy Minister Joerg Steinbach had earlier said that Musk would be visiting, adding no meetings with either him or state premier Dietmar Woidke were planned as the visit was mainly “technical in character”.</p> <p>“There should be some kind of active process for removal of rules. Otherwise, over time, the rules will just accumulate and you get more and more rules until eventually you can’t do anything,” Musk said.</p> <p>German newspaper Tagesspiegel said that the Tesla <span class="caps">CEO</span> and founder’s plane had landed in Berlin late on Sunday.</p> <p/> <p> (Reporting by Leon Malherbe and Nadine Schimroszik; Writing by Christoph Steitz; Editing by Barbara Lewis and Alexander Smith)</p> </body></p>