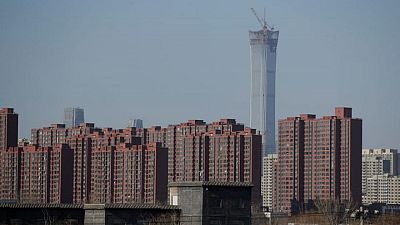 BEIJING (Reuters) -New home prices in China grew at the fastest pace in eight months in April, data showed on Monday, despite the government’s ramped-up efforts to tame the market and tackle an alarming build-up in debt.

Average new home prices in 70 major cities grew 0.6% in April from a month earlier, the quickest pace since August 2020 and a notch up from a 0.5% gain in March, according to Reuters calculations based on data released by the National Bureau of Statistics.

On a year-on-year basis, growth in new home prices rose to an eight-month high of 4.8%, compared with 4.6% in March.

First- and second-tier cities continued leading monthly price growth, with new home prices in those cities rising an average of 0.6% month-on-month in April, the NBS said in a statement accompanying the data.

Among those, Chongqing Municipality and Guangzhou city are top contributors to the strength.

“Local governments have become more surgical in their management of the housing market, unlike previous sweeping crackdowns, thus home buying demand for living in or for investment in big cities hasn’t been fully crowded out,” said Lu Wenxi, chief analyst with property agency Centaline.

With more smaller cities imposing tightening measures, the advantage of being in a “policy vacuum” had gone, and purchasing power had returned to bigger cities, he added. He also expected home prices in tier-1 and 2 cities to keep climbing, outperforming lower-tier towns.

Real estate, a vital source of growth for China’s economy, has bounced back quickly from the COVID-19 crisis. But a relentless rise in home prices in big cities, which is now spilling over into nearby smaller ones, has raised concerns about overheating.

The month saw authorities in a dozen cities intensify their campaigns to drive speculators out of the property market, using incremental tools rather than sweeping curbs. Local policies include capping prices set by developers and preventing some real estate agencies from setting excessively high second-hand home prices.

Separate NBS figures showed China’s real estate investment rose 21.6% in the first four months of the year, slowing from 25.6% in the first quarter, amid increased scrutiny of developers to prevent rampant debt growth.