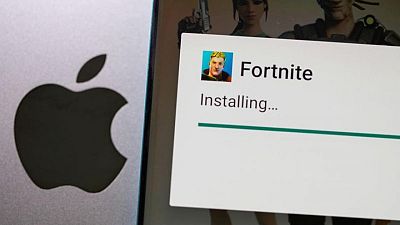 <p><body> <p>By Stephen Nellis and Paresh Dave</p> <p><span class="caps">SAN</span> <span class="caps">FRANCISCO</span> (Reuters) – In its ongoing case against Apple Inc, “Fortnite” creator Epic Games is counting on this week’s testimony from its star expert witness David Evans, chairman of Global Economics Group, to make its case that Apple is an anticompetitive monopolist over app developers.</p> <p>Apple has called its own experts to rebut Evans’ views on the market, but with an added personal twist: It called <span class="caps">MIT</span> economist Richard Schmalensee, who has authored numerous books and academic papers together with Evans, to accuse Evans of contradicting his own prior research.</p> <p>Legal experts said Apple’s aim was to chip away at Evans’ credibility in the eyes of the judge who will rule on the case.</p> <p>The erstwhile collaborators – who together have written works cited extensively by the U.S. Supreme Court in landmark antitrust decisions – are duking it out over the central issue in the three-week trial in federal court in Oakland, California: What is the relevant market in the case? </p> <p>Framed Epic’s way, Apple and its app store are a monopoly that is abusing control over the mobile software market to extract commissions for payments made inside apps. But Apple argues that it is just one of many competitors in a healthy market for video game purchases.</p> <p>Whichever side prevails in persuading Judge Yvonne Gonzalez Rogers on the question of market definition will likely win the entire case, antitrust experts said.</p> <p>“Epic absolutely has to win the market definition,” said Daniel Lyons, a professor at Boston College Law School. “If Apple is right that ‘Fortnite’ on iOS is just one small part of the larger ‘Fortnite’ universe, then Apple doesn’t have market power and anything they do is unlikely to cause consumer harm because consumers can switch.”</p> <p>On the stand this week, Evans testified that Apple is what is known as a single-brand market, arguing that once consumers buy an iPhone, the costs of switching to an Android are so high that they rarely make the jump. </p> <p>Since about 2010, Evans testified, Apple’s App Store has effectively been its own market, and users rarely venture outside. After Apple kicked “Fortnite” off the App Store, Evans testified, only a small fraction of Apple users jumped to other devices like PCs or gaming consoles to play “Fortnite.”</p> <p>Schmalensee, by contrast, contends that the relevant market is gaming transactions, where Apple is just one platform among many – Microsoft Corp’s Xbox and Sony Group Corp’s PlayStation – sitting between game developers and gamers and charging commissions to facilitate transactions.</p> <p>Apple’s App Store is a two-sided marketplace, Schmalensee testified, a concept that he and Evans have written about extensively, including in an amicus curiae brief on behalf of American Express in a 2018 U.S. Supreme Court case.</p> <p>American Express had prohibited merchants from steering their customers toward rival cards with lower swipe fees, arguing that its higher fees helped fund cardholder perks that benefited consumers. The court sided with American Express, citing Evans and Schmalensee extensively in its decision. </p> <p>Schmalensee said Apple’s rules that prohibit apps from steering consumers to less costly payment presented an almost identical issue, and that Evans had contradicted many aspects of his previous work.</p> <p>Outside observers have been surprised by the split between the two star economists.</p> <p>“I would say (Evans’) views on AmEx haven’t changed, but what he would say is the facts here are different and so the same result isn’t appropriate,” said Geoff Manne, president and founder of the International Center for Law & Economics research center. “Personally, I don’t see how he gets there and gets it to stick.”</p> <p>Part of Apple’s strategy in putting Schmalensee on the stand was to bring up the differences between Evans’ previous work and his current view of the Epic case in a bid to make his testimony look less credible, observers said.</p> <p>“Each of them knows though that whatever opinions they have said in the past have to be consistent with what they say now,” said Steven Salop, professor of economics and law at Georgetown University and a self-described consultant to Epic on its case.</p> <p>Schmalensee declined to comment, and Evans did not immediately return requests for comment.</p> <p/> <p> (Reporting by Stephen Nellis in San Francisco and Paresh Dave in Oakland, California; Editing by Jonathan Weber and Leslie Adler)</p> </body></p>