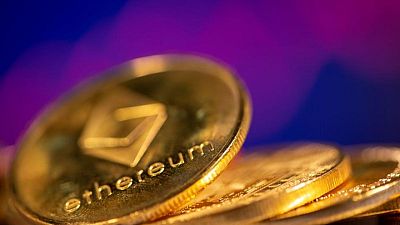 By Ritvik Carvalho and Gertrude Chavez-Dreyfuss

LONDON/NEW YORK (Reuters) – Cryptocurrency ether hit another record high on Wednesday, taking gains this year to close to 500% on the back of growing interest in decentralized finance applications and increasing institutional interest in cryptocurrencies.

Ether has jumped about 470% against the dollar this year as the ethereum blockchain becomes more widely used by peer-to-peer – or decentralised – cryptocurrency platforms that enable crypto-denominated lending outside of traditional banking institutions.

The surge has also seen ether – which in the crypto world is also widely referred to as ethereum – outperform bitcoin, which has almost doubled in price this year as larger investors warm to the emerging technology.

“Ethereum is growing in part by the prospects of a revamped network with the right upgrades highly anticipated to accommodate DApps (decentralized applications) and smart contracts that are built on it,” said Nick Spanos, co-founder of Zap Protocol, a blockchain-agnostic decentralized network. “The coin is bound to grow more in the near future, with an ambitious target of $10,000 by year end.”

U.S. bank J.P. Morgan on Wednesday said the pace of evolution in the ethereum market has “remained rapid” and that there is still room for growth.

Open interest in CME Ethereum futures had increased to $540 million in three months, the bank’s analysts said in a note. A similar level of open interest in CME Bitcoin futures took more than two years after listing in 2017, they added.

Still, U.S. regulators warned investors on Tuesday over the risks of bitcoin futures in mutual fund investments. In a statement, the Securities and Exchange Commission said bitcoin was a highly speculative market that lacked regulation.

The same J.P. Morgan analysts said last week that ether’s increasing valuation was not underpinned by data showing how widely it is used.

Factors such as the number of active digital addresses in its network would be more consistent with a price of around $1,000, the U.S. bank said.

(Reporting by Ritvik Carvalho in London and Gertrude Chavez-Dreyfuss in New York; additional reporting by Marc Jones and Tom Wilson in London; Editing by Hugh Lawson, Will Dunham and Chizu Nomiyama)