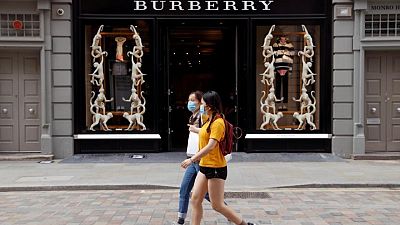 LONDON (Reuters) -Burberry said on Thursday its recovery from the COVID-19 pandemic was accelerating, partly due to a rebound in China, allowing the British luxury brand to reinstate a dividend payment.

Other big luxury groups like Hermes, Kering and LVMH are also on course to put the COVID-2019 crisis behind them, with first-quarter revenues already exceeding pre-pandemic levels.

The label, known for its trench coats, check fabric and TB monogram, reported a 10% drop in sales for the year to March 27, hit by store closures and reduced tourism.

The company’s shares fell around 8% in early trading.

But Burberry said fourth-quarter comparable store sales increased 32% year-on-year, despite an average of 16% of stores still being closed.

It said full-price sales rose 63% in the quarter driven by mainland China, Korea and the United States.

In March, Burberry faced calls for a consumer boycott in the Chinese market over Xinjiang cotton.

Taking full-year 2020 as the base year, Burberry expects revenue to grow in the medium term at “a high single digit percentage” compound annual growth rate at full-year 2021 constant exchange rates.

The company said this growth will be driven by full-price sales as the fashion company exits markdowns in mainline stores in full-year 2022.

Burberry also said that the move to reduce markdowns would be a headwind against comparable store sales growth amounting to “a mid-single digit percentage” in the year.

The company said adjusted operating margin progression during the year would be impacted by increased investment to accelerate growth.

The full-year dividend was reinstated at 2019 levels of 42.5 pence.

Shares in Burberry, up 18% so far this year, had closed on Wednesday at 2,104 pence, valuing the business at 8.57 billion pounds.