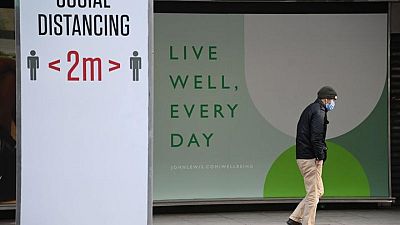 By William Schomberg and Andy Bruce

LONDON (Reuters) -Britain’s economy grew by a stronger-than-expected 2.1% in March from February, gathering speed for what is expected to be a sharp bounce-back this year after its deep coronavirus slump of 2020, official data showed on Wednesday.

The growth was led by the retail sector, the reopening of schools and the construction sector as the country began to emerge from its COVID-19 winter shutdown.

Economists polled by Reuters had expected monthly growth of 1.3%.

In the first three months of 2021, when the country was under a third lockdown, gross domestic product shrank by 1.5%, the Office for National Statistics said, in line with the Bank of England’s latest forecast.

The BoE also said last week it expected the world’s fifth-biggest economy would recover quickly as coronavirus restrictions are lifted to grow by 7.25% in 2021 as a whole.

That would be its fastest growth since a Second World War rush to rearm but would follow a GDP collapse of 9.8% in 2020, which was almost the biggest in Europe and its deepest slump in over three centuries.

“Despite a difficult start to this year, economic growth in March is a promising sign of things to come,” British finance minister Rishi Sunak said.

“As we cautiously reopen the economy, I will continue to take all the steps necessary to support our recovery.”

Britain’s economy remained 8.7% smaller than at the end of 2019, before the pandemic hit the West. The BoE expects it will be back to its pre-pandemic size by the end of this year.

Britain’s economy has become more resilient to imposition of lockdowns since March last year and the 1.5% fall in the first three months of 2021 was much less severe than initial forecasts of a hit of around 4%.

Prime Minister Boris Johnson allowed non-essential shops to reopen and outdoor hospitality to resume in April in England and further relaxations are due to take place next week before the lifting of almost all restrictions in late June.

The ONS data showed Britain’s dominant services industry grew by 1.9% in March from February, its strongest growth since last August, while manufacturing and construction also grew more strongly than expected by analysts in the Reuters poll.

Separate trade figures showed Britain imported more goods from non-EU countries than EU countries during the first quarter for the first time since records began in 1997.

The ONS warned it was too soon to say if this was the start of a trend or just short-term disruption.

“Exports of goods to the EU continued to increase in March and are now almost back to their December level,” ONS statistician Darren Morgan said.

“However, imports from Europe remain sluggish in the first three months of the year, being outstripped by non-EU imports for the first time on record.”