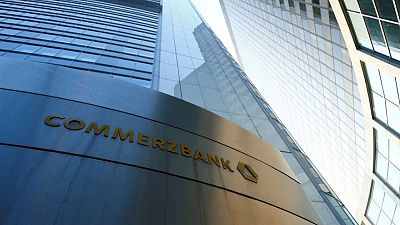 FRANKFURT (Reuters) -Germany’s Commerzbank swung to a first quarter profit, beating expectations, as the lender undergoes a major restructuring, and it said its outlook for revenues in 2021 was rosier than it had earlier anticipated.

Commerzbank said on Wednesday it posted a net profit of 133 million euros ($161.2 million) in the three months through March, compared with a loss of 291 million euros a year earlier. Analysts had expected a net loss of 131 million euros.

The bank said it now expects revenues for the year to slightly exceed 2020, a more optimistic view than previous expectations for slightly lower income.

Commerzbank is undergoing a 2 billion euro restructuring involving the closure of hundreds of branches and reduction of 10,000 staff.

The agreement is central to Knof’s effort to streamline the country’s second-biggest listed lender and return it to profitability.