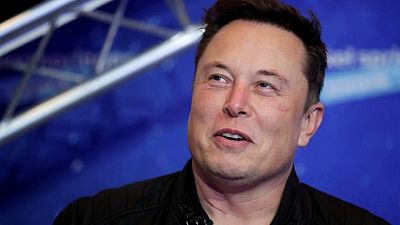 By Subrat Patnaik and Bhargav Acharya

(Reuters) -Billionaire Elon Musk and cryptocurrency aficionado on Tuesday asked https://bit.ly/33xrDHR his 54 million followers on Twitter “Do you want Tesla to accept Doge?,” referring to a digital currency worth roughly 48 cents with no real-world use.

The question, in the form of a Twitter poll, comes days after he called dogecoin a “hustle,” sending the meme-inspired cryptocurrency’s price reeling after a 700% rally in a month.

A proponent of digital currencies, the Tesla Inc chief executive made the comment as a guest host on the “Saturday Night Live” TV show this past weekend.

Musk is one of the world’s richest people and owner of several futuristic companies, including SpaceX and Neuralink. He has used his candid Twitter feed to give his opinion on cryptocurrencies, including bitcoin, most times affecting their price.

In March, Musk said U.S. customers could purchase Tesla vehicles with bitcoin, marking a significant step forward for the cryptocurrency’s use in commerce. The electric-car maker had bought $1.5 billion worth of bitcoin earlier this year, propelling its prices to record highs.

Based on current prices, one would need nearly 80,000 dogecoins or 0.7 bitcoin to buy the cheapest Tesla Model 3 car.

Dogecoin was last up 9% at $0.507, according to data tracker CoinGecko.com.

Musk’s poll on dogecoin received over 3.3 million responses in the 12 hours since he posted it, with nearly 80% of the respondents voting to ratify the new payment method.

It comes just days after Musk said that SpaceX would accept dogecoin as payment to launch a lunar mission next year.

The limited supply of bitcoin helps drive its value as the digital currency gradually gains acceptance for commercial transactions. Whereas dogecoin, which began as a social media joke in 2013 with a shiba inu dog as its avatar, has an unlimited supply and remains seldom used to make payments for goods.

Dogecoin jumped more than 700% over the last month and is now the fourth-largest digital currency. It hit a record high Thursday above 73 cents.

The billionaire’ s tweets have drawn SEC scrutiny in the past, but his recent remarks about cryptocurrencies have not landed in him in any regulatory troubles so far.

Shares of Tesla were down 1.3% at $621 a share in late trading on the Nasdaq after Reuters reported the U.S. electric car maker had halted plans to buy land to expand its Shanghai plant.