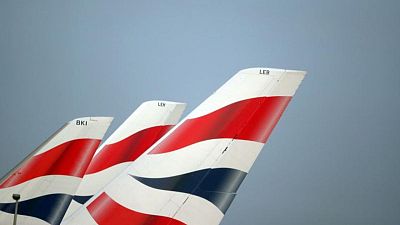 LONDON (Reuters) -British Airways-owner IAG said it would launch a convertible bond with an initial issue size of 800 million euros, the group’s latest move to strengthen its balance sheet as travel continues at very low levels during the pandemic.

IAG, which also owns Aer Lingus, Iberia and Vueling, has a weekly cash burn rate of 175 million euros ($213 million) while most of its fleet is grounded due to restrictions, meaning its focus over the past year has been on raising funds.

Forecasting a travel recovery from July, the group last week said it had liquidity of 10.5 billion euros, helped by a recent bond issue, a revolving credit facility and the deferral of some pension payments.

It plans to add around 800 million euros to that, equivalent to over a month’s cash burn, through an offer of senior unsecured bonds convertible into IAG shares and due in 2028.

The news weighed on the shares, which fell 5% to 199.5 pence in early trading, more than a 2% decline in Britain’s bluechip market.

IAG said the proceeds would strengthen its finances given continued uncertainty around the travel recovery, but could also be used to provide extra resources to take advantage of a recovery in demand.

“This is simply the next move for IAG to continue to bolster liquidity while the crisis drags on,” said Bernstein analyst Daniel Roeska.

IAG was left disappointed by Britain’s cautious reopening of travel last week, which left its big markets, Spain and the United States, off a list of low-risk destinations.

The final terms of the bonds will be announced later on Tuesday. The conversion price is expected to be set at a premium of 45-50% to the volume weighted average price of the shares in the period from launch to pricing.