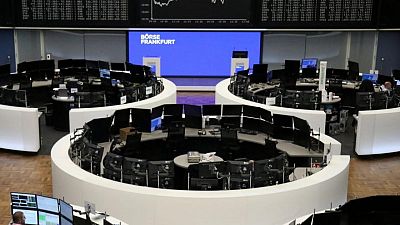 NEWYORK (Reuters) -U.S. stocks fell on Tuesday as speculation that rising inflation pressure could prompt interest rate hikes sooner rather than later dragged on shares and hobbled the dollar, which struggled at a 2-1/2-month low.

Technology stocks were among the biggest losers, mirroring a sell-off in other technology stocks overnight in China, where talk of tighter regulation sent shares skidding.

By midday, however, shares had significantly pared losses, with the tech-focused Nasdaq Composite reversing the bulk of its earlier declines after dropping as much as 2% earlier in the session.

Investors said the snap back in shares suggested that inflation concerns were not quite so entrenched yet, and that the sheer volume of money that is sloshing around in financial markets meant some individuals are always looking to invest their cash on pull-backs right now.

“Welcome to a lot of money,” said Paul Nolte, a portfolio manager at Kingsview Investment Management, which oversees $2 billion. “The worry is maybe inflation is something more than transitory, but it looks like this is a mood swing for now rather than a longer-term concern.”

Bets that inflation could accelerate in the coming months burst to the fore on Monday when U.S. five-year breakevens – a measure of inflation expectations – jumped a decade-high 2.717%.

All eyes are now on the next U.S. consumer price index report to be released by the U.S. Labor Department on Wednesday. Until then, some investors appeared to be buying on dips.

The dollar, which slipped to a new 10-week low earlier on Tuesday on concerns that mounting price pressures could erode its value, had clawed back some losses by midday.

Gold also recouped earlier declines, as a softer dollar offset losses generated by rising U.S. Treasury yields. Spot gold was little changed at $1,833.66 per ounce, after dropping as much as 1% earlier.

The spread between benchmark two- and 10-year Treasuries also widened slightly to 146 basis points, up 2 basis points from the previous day.

Oil prices did not escape the day’s volatility either, and reversed earlier losses to notch modest gains by midday, driven by lingering fears of a gasoline shortage after a cyberattack caused an outage at the largest U.S. fuel pipeline system.

In cryptocurrencies, ether dipped from record levels hit yesterday, but was nevertheless up 1.48% at $4,008.65. The second-biggest digital token has rallied 44% so far in May.