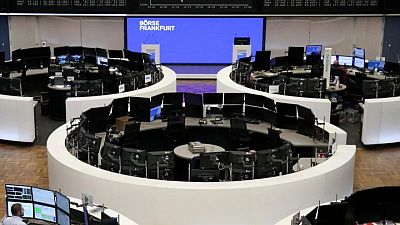 (Reuters) – European stocks retreated from all-time highs on Friday, with shares of technology, travel and mining companies among the top losers after worries about rising U.S. inflation knocked back U.S. indexes.

The pan-European STOXX 600 index fell 1.6% after it hit a record closing high on Monday. The main bourses in Frankfurt, Paris and London all lost more than 1.5%.

Global sentiment soured after inflation jitters drove investors away from Wall Street’s market-leading growth stocks on Monday ahead of the latest reading on U.S. consumer prices, which many fear could prompt the Federal Reserve to rethink its monetary policy stance.

European tech shares tumbled 2.2% to their lowest level since late March, while miners handed back some of their strong gains in the previous session.

Travel and leisure stocks slumped 3.7% as Sweden’s Evolution Gaming Group tumbled 9.6% after the bookrunner announced the pricing of block trades.

(Reporting by Sruthi Shankar in Bengaluru; Editing by Saumyadeb Chakrabarty)