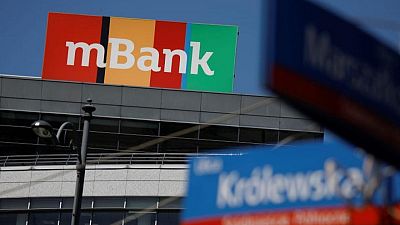 By Alan Charlish and Pawel Florkiewicz

WARSAW (Reuters) – When Polish IT specialist Przemyslaw Rowinski’s wife died in 2013, he was left alone in the central Warsaw flat which they bought together in 2005 with a mortgage in Swiss francs whose repayments soon shot up.

In 2015, the franc – already appreciating against the zloty – skyrocketed as the Swiss central bank removed a currency cap.

“I was left alone with this mortgage,” Rowinski told Reuters in the 10th-floor flat overlooking the capital’s old town. “The removal of the cap on the franc — it was a shock… the instalments jumped by 100%.”

Thousands of Polish borrowers took out the loans more than a decade ago to take advantage of low Swiss interest rates but faced higher costs when the zloty slumped.

Many, like Rowinski, have decided to take the banks to court over clauses they say are abusive and the problem could cost the banking sector over 200 billion zlotys ($53 billion) in worst-case scenario estimates. More than 37,000 lawsuits were filed in 2020, according to data from the Polish Justice Ministry cited by Rzeczpospolita daily.

Germany’s Commerzbank, Portugal’s BCP and France’s BNP Paribas all have foreign-exchange denominated mortgage portfolios in Poland as do domestic lenders such as PKO BP.

While most cases are won by mortgage holders, there have been variations in how courts treat the issue.

This could be resolved by the Polish Supreme Court sitting on Tuesday which is expected to determine whether banks agree to sign up to a plan for settlements with clients.

“This sitting is important because… it is the complete opinion of all the judges, the whole chamber,” said Kamil Chwiedosik, founder of the Life Without Credit organisation which helps mortgage holders in legal proceedings with banks.

While many borrowers like Rowinski have already decided to sue, others, like 42-year-old manager Piotr Brzostek are waiting to see how banks react to the Supreme Court guidelines.

“We will see how the banks behave,” Brzostek told Reuters by telephone. “If the banks start to propose some sensible… conversion maybe I will lean towards that, not suing the bank.”

In December, the head of Poland’s financial market regulator KNF proposed a plan for banks to convert foreign currency loans into zlotys as if they had been taken out in the local currency originally.

However, so far only the nation’s largest lender PKO BP has committed itself to settlements, with others waiting for Tuesday’s guidance.

“If the Supreme Court guidance is unfavourable for the banks, they will need to increase their provisioning against losses related to these mortgages and may lose bargaining power in out of court settlements,” ratings agency Moody’s said in a recent note.

The Polish banking sector had a net profit of 7.7 billion zlotys in 2020.

“In the blackest scenario… the banking sector is seriously threatened, a situation in which some banks are insolvent is possible,” said Tadeusz Bialek, deputy head of the Polish Bank Association (ZBP).

Rowinski hopes the Supreme Court will give a clear line for judgements. “For me, personally… it gives hope that in the end there will be some justice,” he said.