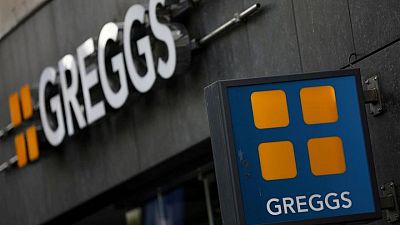 LONDON (Reuters) -British bakery and fast-food chain Greggs has raised its outlook for current year profits, saying they could reach 2019’s record levels after a strong recovery in sales in the wake of the easing of COVID-19 restrictions.

While Greggs’ shops, best known for their sausage rolls, steak bakes and vegan snacks, have been able to stay open through the pandemic, the crisis has disrupted its business model, which relies on a high volume of customer visits.

Shares in the group had soared 10.4% by 0853 GMT on Monday, extending gains this year to 45%, after it said like-for-like sales had been positive on a two-year basis since non-essential retail reopened in England and Wales on April 12.

It said like-for-like sales in the eight weeks to May 8 were down 3.9% compared with the same period two years ago, having fallen 23.3% in the 10 weeks to March 13.

Taking the two periods together, like-for-like sales were down 13.5% over the 18 weeks to May 8.

“The recovery’s been stronger than we expected,” Chief Executive Roger Whiteside told Reuters.

“Assuming there are no returns of restrictions and lockdowns, we’re feeling that it could be we get back to our 2019 levels of profit this year which would be a lot earlier than we first anticipated,” he said.

Previously Greggs had not expected profit to return to pre-pandemic levels until 2022 at the earliest.

That service has been rolled out to 800 of Greggs’ outlets, with sales from the channel representing 8.2% of company-managed shop sales in the most recent eight-week period.

Despite the pandemic, Greggs is still opening new shops, targeting a net 100 new stores this year. It has so far opened 23, giving a total of 2,101 shops trading as at May 8.

With the pandemic driving a sharp dip in rents, the pipeline includes Greggs’ first store in London’s Canary Wharf business district and an outlet at North Greenwich underground station.