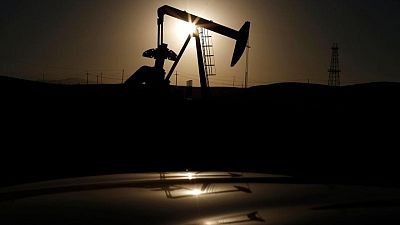 <p><body> <p>By Jessica Resnick-Ault</p> <p><span class="caps">NEW</span> <span class="caps">YORK</span> (Reuters) -Oil prices settled higher on Monday after a major U.S. fuel pipeline said it could largely restart within the week after a cyberattack forced its shutdown. </p> <p>Potential U.S. demand growth boosted crude prices, offsetting fears that a resurgent coronavirus pandemic in India would cut demand in Asia. </p> <p>Colonial Pipeline, the largest fuel pipeline in the United States, said on Monday it expects to “substantially” restore operational service by the end of the week. </p> <p>The system was shut by a cyberattack on Friday, and by Sunday some minor conduits had been reopened while the main lines remained shut. </p> <p>Last week, traders’ focus had shifted to supportive factors around the U.S. opening. “Now the market will be watching the pipeline story,” said Phil Flynn, a senior analyst at Price Futures Group in Chicago. </p> <p>Brent crude settled up 4 cents, or 0.1%, at $68.32 a barrel. U.S. West Texas Intermediate (<span class="caps">WTI</span>) crude settled up 2 cents, or 0.03% at $64.92. Both benchmarks rose more than 1% last week, their second consecutive weekly gain.</p> <p>“If the pipelines were to remain out of action for any length of time, this would have far-reaching effects on the oil market not only in the U.S., but also in Europe,” said Commerzbank analyst Carsten Fritsch. </p> <p>“That said, it is currently assumed that the disruption to the pipelines will be resolved in a matter of days, so the impact should be limited.”</p> <p>The White House was working with Colonial to help it recover. Commerce Secretary Gina Raimondo said the pipeline fix was a top priority. </p> <p>The U.S. government has not received any requests to waive the Jones Act in response to the pipeline shutdown, a spokesman for the U.S. Customs and Border Protection said on Monday.</p> <p>A top White House national security official said the U.S. intelligence community is working to determine whether the hackers of the Colonial Pipeline have ties to the Russian government.</p> <p>Anne Neuberger, deputy national security adviser for cyber, told reporters at a White House briefing that the <span class="caps">FBI</span> has been tracking the ransomware group DarkSide since at least last October. A news release issued in the name of DarkSide said its goal was to make money and not create problems for society.</p> <p>Brent crude has risen more than 30% this year, supported by supply cuts by the Organization of the Petroleum Exporting Countries and allies, known as <span class="caps">OPEC</span>+, and easing coronavirus movement restrictions in the United States and Europe.</p> <p>But the worsening pandemic in Asia has weighed. Indian coronavirus infections and deaths held close to record daily highs on Monday. </p> <p> (Reporting by Jessica Resnick-Ault in New YorkAdditional reporting by Alex Lawler in London, Aaron Sheldrick in Tokyo and Florence Tan in SingaporeEditing by David Gregorio and Matthew Lewis)</p> </body></p>