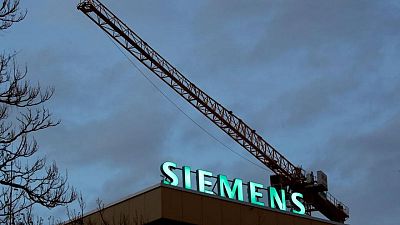 ZURICH (Reuters) -Siemens increased its full year profit and sales outlook for the second time this year on Friday as the Germany industrial group became the latest company to report a recovery from last year’s pandemic-driven downturn.

The Munich company said it was seeing strong momentum in the automotive and machine building sectors and for industrial software, helping it to beat forecasts for revenue, orders, and industrial profit during the three months to the end of March.

Like other industrial companies such as Switzerland’s ABB and France’s Schneider Electric Siemens has been seeing increasing orders as customers ramp up their production, and an improvement in China.

“On this basis, we are even more confident about the second half of our fiscal year and are raising our guidance significantly for both our Industrial Businesses and net income,” said Siemens Chief Financial Officer Ralf Thomas.

Siemens now expects comparable revenue to rise by 9 to 11% for the full year, up from the previous view of mid to high single digit growth.

Full year net profit meanwhile is now expected to be in the range of 5.7 billion to 6.2 billion euros ($7.48 billion)range, above the previous expectation of net income of 5.0 to 5.5 billion euros.

During its second quarter, Siemens reported industrial operating profit of 2.09 billion euros, slightly ahead of the 2.015 billion euros forecast by analysts in a company gathered consensus.

Net profit rose 2.39 billion euros, boosted by a 900 million euro gain from the sale of the mechanical and electrical drive systems business Flender.