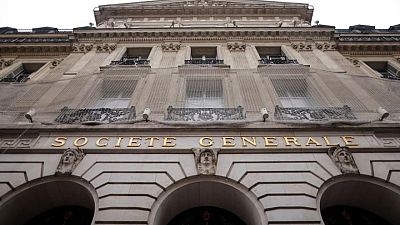 <p><body> <p><span class="caps">PARIS</span> (Reuters) – France’s third-biggest listed bank Societe Generale on Thursday recorded a sharp rebound in its trading business in the first quarter and better-than-expected earnings as it looks to bed down an overhaul of its investment bank. </p> <p>The lender, which tumbled in 2020 to its first full-year loss for a decade as the <span class="caps">COVID</span>-19 pandemic rattled its businesses, posted a 814 million euros net profit in the quarter against a 326 million euros loss a year ago.</p> <p>Earnings per share amounted to 0.79 euro, above a mean forecast for 0.23 euro according to Refinitiv data.</p> <p>In equity trading, an area where peers also performed well in the first three months of 2021, revenue jumped to 851 million euros against 9 million euros last year.</p> <p>A year ago, the French group was hit by turbulence in equities trading, with losses in structured products, and had said it would exit some business lines. </p> <p>SocGen is due to unveil the review of its corporate and investment bank on May 10.</p> <p>Revenue was up by 2.63% in fixed income and currency trading, outperforming some European rivals such as <span class="caps">BNP</span> Paribas and Barclays but still lagging U.S. investment banks. </p> <p>“Global markets enjoyed a record quarter, with the highest level of activity since Q1 2017,” SocGen said in a statement. </p> <p>SocGen also confirmed pandemic-related provisions would fall this year from 2020 levels. The bank now sees its cost of risk, which reflects provisions against bad loans, to be between 30 and 35 basis points in 2021 against 64 basis points last year.</p> <p>Shares in SocGen have gained 38.5% since the beginning of the year after a 45% slump in 2020. Its share price has more than doubled since its lowest at 10.77 euros on Sept. 30.</p> <p>As part of an overhaul of its business to boost profitability, SocGen entered last month in exclusive talks to sell most of its asset management arm Lyxor to Amundi for 825 million euros.</p> <p>The lender said last year it would merge its two retail banking networks in France, with the closure of 600 of its nearly 2,100 branches by 2025. The plan will save more than 350 million euros in costs in 2024 and nearly 450 million euros the year after.</p> <p>As the coronavirus outbreak accelerates the shift to online banking across Europe, SocGen also aims to strengthen its Boursorama online operation.</p> <p/> <p> (Reporting by Matthieu Protard and Marc Angrand, Editing by Sarah White)</p> </body></p>