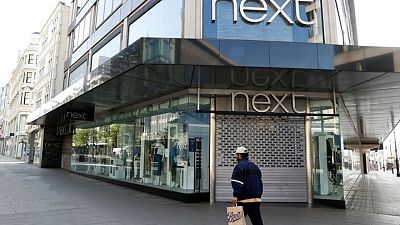 <p><body> <p>By James Davey</p> <p><span class="caps">LONDON</span> (Reuters) – British fashion retailer Next raised its full-year profit guidance for the second time in two months as it reported better than expected first-quarter trading, but cautioned it did not expect a post-lockdown surge in sales to endure.</p> <p>Next, which trades from about 500 stores as well as online, said on Thursday full price sales in the 13 weeks to May 1 fell 1.5% compared with the same period two years ago – before the <span class="caps">COVID</span>-19 pandemic started to disrupt trading last year.</p> <p>The group’s previous guidance assumed first-quarter sales would tumble 10% from the same period in fiscal 2019-20. It said it had beaten this forecast by 75 million pounds ($104 million).</p> <p>Full price sales in the three weeks to May 1 were up 19% versus two years ago, partly reflecting the reopening of the majority of stores on April 12 after over three months of lockdowns.</p> <p>“We’re not getting too excited about that because after each of the last lockdowns we did see a spike in demand that petered away after a few weeks,” <span class="caps">CEO</span> Simon Wolfson told Reuters.</p> <p>“What we’re seeing at the moment is pent-up demand that I don’t think is necessarily indicative of what is to come.”</p> <p>As a result Next did not raise its sales guidance for the rest of the year, which it kept at up 3% versus two years ago.</p> <p>But it did raise its central guidance for 2021-22 pretax profit to 720 million pounds, up from the 700 million pounds forecast in April. It made 342 million pounds in 2020-21. </p> <p>Shares in Next were up 2.7% at 0819 <span class="caps">GMT</span>, extending year-on-year gains to 80%.</p> <p>Next has shown resilience during the pandemic, benefiting from its long-established online operations.</p> <p>Rivals with weaker or no online business, notably Primark, have seen far larger falls in sales. Others, such as Topshop-owner Arcadia, and Debenhams have gone out of business.</p> <p>Next said first-quarter sales from its stores were down 76% on two years ago, reflecting lockdowns, while online sales increased 65%.</p> <p>Wolfson said the mix of products sold had started to change in recent weeks as restrictions were loosened.</p> <p>He said Next had seen a significant recovery in sales of adult clothing, particularly womens’ casual wear.</p> <p>But sales of warm weather holiday wear, such as swimwear, remained at much lower levels that two years ago.</p> <p>($1 = 0.7189 pounds)</p> <p/> <p> (Reporting by James Davey; Editing by Sarah Young, Mark Potter and Kim Coghill)</p> </body></p>