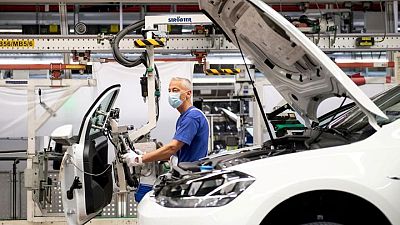 <p><body> <p>By Michael Nienaber</p> <p><span class="caps">BERLIN</span> (Reuters) -Strong domestic demand for consumer goods propelled a bigger than expected jump in German industrial orders in March, data showed on Thursday in a sign that manufacturers will support a recovery once supply and delivery bottlenecks are overcome.</p> <p>The German economy, Europe’s largest, shrank by 1.7% in the first quarter as restrictions to contain the coronavirus stifled private consumption and chip shortages held back production in the automobile industry.</p> <p>The data published by the Federal Statistics Offices showed orders for industrial goods ‘Made in Germany’ jumped on the month by 3% in seasonally adjusted terms.</p> <p>This easily beat a Reuters forecast of 1.7% and came after an upwardly revised increase of 1.4% in February and a rise of 0.8% in January.</p> <p>Domestic orders rose by 4.9% in March on the month while foreign bookings increased by 1.6%. The strong increase was driven by an unusually large number of major contracts. Without this effect, orders were up by 1.6%, the office said.</p> <p>“The demand for German industrial goods is unbroken. This time, however, orders for big-ticket items also helped a lot,” said Alexander Krueger from Bankhaus Lampe.</p> <p>“The dilemma remains that orders are distributed faster than processed,” Krueger said, pointing to the supply and delivery bottlenecks at automakers which have led to production cuts.</p> <p>Looking at industrial sectors, the increase in the headline figure was mainly driven by strong demand for consumer goods which jumped by 8.5%, the economy ministry said.</p> <p>Bookings for intermediate goods were up by 2.8% and those for capital goods rose by 2.5%.</p> <p>Orders were particularly high in the sectors of mechanical engineering, manufacturing of data processing equipment and electronic and optical products, the ministry said.</p> <p>In a sign that manufacturers are partly overcoming supply bottlenecks with semiconductors and other industrial components, real industrial sales rose by 2% on the month in calendar-adjusted terms, the statistics office said.</p> <p>This points to an equally solid increase in industrial output for which data is due on Friday and economists forecast a 2.3% increase.</p> <p>The continued positive trend in incoming orders is laying the foundation for a solid economic recovery in the coming months, Thomas Gitzel from VP Bank said.</p> <p>“The shortage of materials is slowing down production for the time being, but once the materials are available again in sufficient quantities, there will be strong catch-up effects,” Gitzel said.</p> <p>The German government last week lifted its economic growth forecast for this year to 3.5% from 3% previously, counting on a rebound of household spending once <span class="caps">COVID</span>-19 restrictions are lifted in the course of the summer.</p> <p>Still, the Bundesbank’s chief economist told Reuters on Friday that he expected the supply bottlenecks in German industry to worsen in the second quarter which could lead to an overall weaker recovery this year.</p> <p> (Reporting by Michael NienaberEditing by Caroline Copley and Toby Chopra)</p> </body></p>