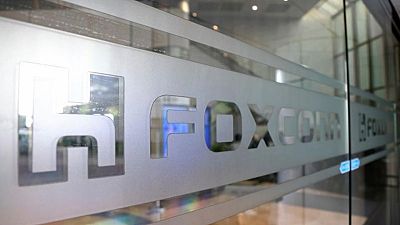 TAIPEI (Reuters) -Taiwan’s Foxconn said on Wednesday it has formed a joint venture with Yageo Corp to expand its presence in the semiconductor industry, as a global chip shortage rattles producers of goods from cars to electronics.

The supply bottleneck has led to production cuts and warnings of supply chain disruption from manufacturers across the world this year.

Electronics manufacturing conglomerate Foxconn, which counts tech giants such as Apple among its top clients, said in a statement the two companies will set up a new firm in Taiwan called XSemi Corporation.

“The semiconductor industry is facing the biggest upheaval in the past three decades, and the industry order will face a serious restructuring,” Foxconn chairman Liu Young-way said.

“Now is undoubtedly the best timing to initiate strategic partnerships in various segments.”

Foxconn said it and Yageo are currently in discussions with “several global semiconductor companies” and will soon announce more collaboration plans in the semiconductor industry, without elaborating.

The company, which has in recent years counted semiconductors among its core businesses, said XSemi will focus on making semiconductor chips, or “small IC”, with average selling prices lower than $2.00.

Taiwan’s semiconductor firms are ramping up production to tackle the global chip shortage and meet booming demand due to the work-from-home trend during the COVID-19 pandemic.

Liu said in March the company is closely monitoring “materials shortages” in the consumer electronics supply chain and that could hit less than 10% of client orders, though it described the impact as limited.

Formally known as Hon Hai Precision Industry Co Ltd, the company has in recent months announced plans to become a major player in the global electric vehicles market, and has said it was in talks with “related foundries” on possible collaboration to make chips for EVs.