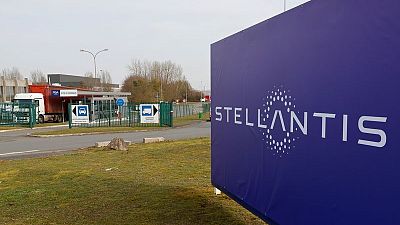 “Clearly the fact that we don’t have to pay Tesla any longer will further improve our performance in Europe,” he told a conference call after forecast-beating quarterly revenues.

Palmer said the chip shortage should improve in the second half of 2021, but warned the disruption to the auto industry could last into 2022.

Carmakers across the world have had to curb output, hampering their attempts to recover from the COVID-19 pandemic, due to a shortage of vital chips used in everything from computer management of engines to driver assistance systems.

So far, however, Stellantis has benefited from focusing on high-margin pickup trucks and SUVs in its crucial U.S. business, as lean inventories have driven up new car prices. The higher prices paid by American consumers added about $1.5 billion to Stellantis’ first-quarter revenues.

Shares in Stellantis, formed at the start of the year from the merger of Italian-American Fiat Chrysler and France’s PSA, rose more than 5%.

Citi analysts described the results as “solid”, adding that “overall it seems likely that Stellantis profitability is running ahead of expectations.”

But production losses due to the chip shortage prevented a stronger rebound from industry wide plant shutdowns in March 2020 to halt the spread of the pandemic.

Chip shortages cut around 11% of Stellantis’ planned production in the first quarter.

Ford Motor Co warned last week the shortage could halve its production in the second quarter.

But he said the disruption had not affected its integration plan, from which the group aims to deliver over 5 billion euros a year in savings.

“The synergy plan is very much on target,” Palmer said.

Stellantis reiterated its forecast for an adjusted operating profit margin of 5.5%-7.5% this year.

The group said planned production launches – for Jeep’s new Grand Wagoneer and Wagoneer large SUV models scheduled for this quarter and for the next generation Grand Cherokee in the third quarter – remained on track.

(Reporting by Giulio Piovaccari in Milan, Gilles Guillaume in Paris, and Nick Carey in London. Editing by Mark Potter)