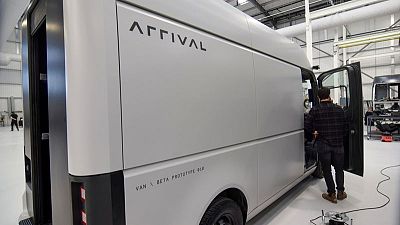 LONDON (Reuters) – British electric van and bus maker Arrival will develop an electric car for Uber Technologies Inc that will go into production in late 2023, the two companies said on Tuesday.

Arrival and Uber will also explore a strategic relationship in key markets, including the United Kingdom, European Union and United States.

The “Arrival Car” will be an “affordable, purpose-built electric vehicle for ride-hailing,” and will go into production in the fourth quarter of 2023, the companies said.

Uber plans to be a fully electric mobility platform in London by 2025, and across North America and Europe by 2030. The company has raised more than 135 million pounds ($188 million) to help its drivers in London upgrade to an electric vehicle by 2025.

“Our focus is now on encouraging drivers to use this money to help them upgrade to an electric vehicle, and our partnership with Arrival will help us achieve this goal,” Jamie Heywood, Uber regional manager for northern and eastern Europe, said in a statement.

Uber aims to sign up an additional 20,000 drivers in Britain as the lifting of COVID-19 restrictions boosts demand, the ride-hailing app said last week.

In March, Uber gave its existing 70,000 UK drivers workers’ rights, including the minimum wage, after it lost a Supreme Court case.

The Arrival Car will need to withstand the high demands of an Uber driver – ride-hailing cars drive up to 50,000 kilometers (31,070 miles) annually, versus 12,000 km for the average car.

The companies said the Arrival Car will prioritize “driver comfort, safety and convenience, while ensuring the passengers enjoy a premium experience.”

Arrival went public in March via a merger with a special purpose acquisition company (SPAC). The startup has so far specialized in electric vans and buses, and its biggest public order is for up to 10,000 vans for United Parcel Service Inc, which also owns a stake in Arrival.

“We have a great partnership with UPS … and we hope to replicate that success with Uber as we develop the best possible product for ride hailing,” Arrival Senior Vice President Tom Elvidge, formerly a manager at Uber, said in a statement.

The Arrival Car will use the “Small Vehicle Platform” the startup referenced in its investor presentation prior to going public.

Arrival said the car would be “affordable,” but did not divulge pricing.

(Reporting by Nick Carey in London; Editing by Matthew Lewis)