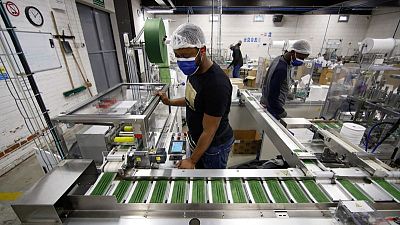 PARIS (Reuters) – French manufacturing activity growth eased off a little in April from the record pace recorded the previous month, as bottlenecks weighed on the sector’s recovery, a survey showed on Monday.

Data compiler IHS Markit said its final purchasing managers’ index fell to 58.9 in April from 59.3 in March, when the index hit its highest level in more than 20 years.

The April result was slightly lower than a preliminary reading of 59.2, though it remained comfortably above the 50-point line dividing expansions in activity from contractions.

While factory output and new orders remained high, companies reported that supply-chain disruptions continued to be a concern as France entered its third national coronavirus lockdown.

“Raw material shortages have been widely reported for a number of months and the resulting upward pressure on costs may begin to take a toll on margins,” IHS Markit economist Eliot Kerr said.

“Fortunately, improving demand conditions allowed firms to pass through these costs at a quicker rate in April, however, with COVID-19 measures ongoing, further sharp increases in costs will likely squeeze profitability,” he added.

Under pressure from business and a weary public, President Emmanuel Macron announced a four-phase plan last Wednesday to wind down the current lockdown in the coming weeks.