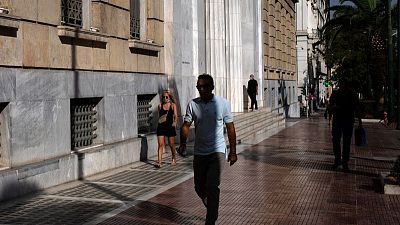 ATHENS (Reuters) -Greece expects its economy to rebound by 3.6% this year with growth picking up pace to 6.2% in 2022, the government’s 2021-24 stability programme submitted to the EU Commission projects.

“With the gradual easing of the containment measures from the second quarter onwards and the full reopening of the economy from the beginning of the third quarter … the Greek economy is expected to return to a positive growth trajectory in 2021,” the stability programme said.

Greece, which emerged from a decade-long financial crisis in 2018, saw its economy slump by 8.2% last year amid restrictions to stem the spread of the COVID-19 pandemic and a collapse in tourism revenues.

The stability programme’s forecast is in line with the European Commission’s projection in February, which sees the Greek economy growing by 3.5% this year.

It is more than one percentage point lower than a 4.8% expansion clip projected in this year’s budget and also below a 4.2% rebound that the central bank estimated earlier this month.

Greece’s gross domestic product (GDP) is projected to climb to 6.2% next year as aggregate demand bounces back to plug the large output gap. It is seen staying on a growth path in 2023 and 2024, expanding by 4.1% and 4.4% respectively.

Looking at public finances, Greece ended last year with a budget deficit of 9.7% of GDP while its primary budget balance, which excludes debt servicing outlays, reached -6.7% of GDP.

The deterioration was attributed to the COVID-19 outbreak and expansionary measures adopted to support the economy.

But in 2022, the stability programme sees fiscal improvement with the general government budget deficit shrinking to 2.9% of GDP as the economy’s recovery accelerates.

The primary budget balance is seen returning to a surplus in 2023 at 2.0% of GDP, while it will take until 2024 for the general government budget to hit a 0.6% of GDP surplus, according to the plan.