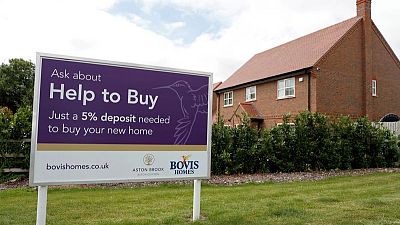 House prices are now 7.1% above their level last April, a growth rate which is just shy of the six-year high of 7.3% recorded in December, as COVID-19 lockdowns and increased home-working continue to boost demand for more spacious housing.

The tax break had been due to expire at the end of March. But the first 500,000 pounds ($697,050) of any property purchase in England or Northern Ireland will now remain exempt from stamp duty land tax until the end of June, and there will be a 250,000 pound tax-free allowance until the end of September.

Sunak introduced the tax break in July last year, in a bid to kick-start the housing market after a collapse in home sales during the initial months of the pandemic.

Demand surged when restrictions eased. Many buyers sought bigger homes further away from city centres, as they began to work from home rather than commute into an office.

The most recent data from the Office for National Statistics, as opposed to Nationwide numbers, shows that house prices in February were 8.4% above their level a year earlier, the largest annual rise since 2014.

Nationwide said there was scope for house prices to rise further in the coming months due to a fairly fixed supply of housing and a continued desire to move as a result of the pandemic, which reduced demand for small city-centre homes.

But Gardner said activity could slow later this year, perhaps sharply, if unemployment increased as expected.

Howard Archer, economist at consultants EY ITEM Club, forecast that annual price growth would tail off towards the end of the year and that prices could fall on a quarterly basis.

“We believe the strength of the housing market is excessive relative to the economic fundamentals, and the level of prices increases will ultimately prove unsustainable,” he said.